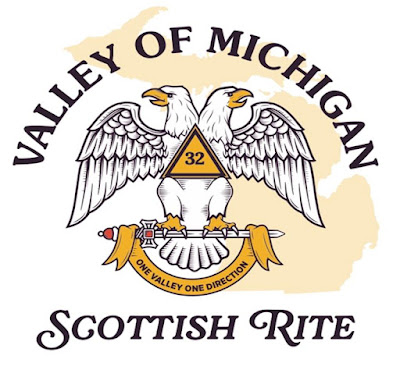 On Thursday this week, it was announced that the five valleys of the Scottish Rite NMJ in Michigan have voted to merge to become one single Scottish Rite Valley for the state. The vote took place during the Michigan Council of Deliberation meeting, and now moves to the Supreme Council for final approval.

Because of the COVID pandemic restrictions, the Council of Deliberation meeting was held this year as a virtual event.

According to the presentation made during the program, the combined Scottish Rite Valleys of Michigan are currently down to just 3,700 members statewide, and just 2,072 of those members (about 56%) pay full, regular dues. The other 44% of Michigan's SR members do not, for a variety of reasons — some are exempted entirely, some pay only the NMJ per capita, some are active military. But the bottom line is that 44% are largely getting a free ride. Moreover, a whopping 80.8% of Michigan's Scottish Rite members currently are over the age of 61, while just 1% are between 21 and 30.

All of that points a boney finger at the future if something isn't done to turn their membership around. Demographics don't lie, and Michigan isn't unique or an outlier. I suspect you are going to see this happen in more states with too many Scottish Rite and York Rite bodies to be supported by an ever-shrinking membership.

According to the presentation, the state will be divided into four regions, and each region will be expected to hold one reunion each year. The Lodge of Perfection, the Princes of Jerusalem, the Rose Croix, and the Consistory administrative bodies will be divided among the four regions - four bodies, but only one to each region. Each region would only have to concentrate on presenting the degrees of its assigned chapter (just to illustrate, imagine that Grand Rapids would do the Lodge of Perfection degrees, Detroit does Princes of Jerusalem, Marquette does Rose Croix, etc.). That way, the regions will cooperate to present more degrees, while concentrating their own efforts on the degrees of their body.

My thumbnail description here does not do it justice. If you have a Facebook account, you can see the presentation and the merger details HERE.
Posted by Christopher Hodapp at Friday, August 14, 2020