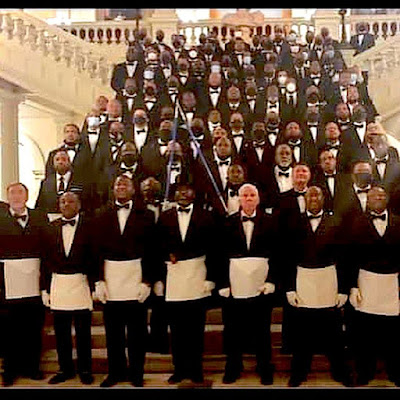 (UPDATE 8:38PM 7/30/20: An earlier version of this story erroneously said Oscar Alleyne, the Senior Grand Warden of New York was in attendance. He was not. I regret the error.)

There is a post-script to Wednesday's Masonic funeral service for U.S. Congressman John Lewis in Atlanta. Before the service began, the brethren filed in, and Prince Hall Grand Master Corey D. Shackleford introduced the honored Masonic visitors. In addition to the large number of Masons from the MW Prince Hall Grand Lodge of Georgia, there was the Grand Master of the MWPHGL of Tennessee L. Lamont Banks. 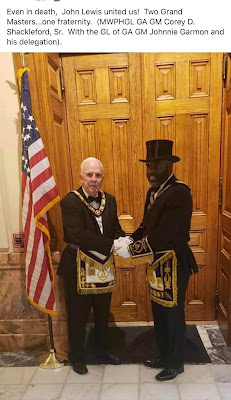 In the Scottish Rite, the motto and message of the 14th degree is "Virtus Junxit Mors Non Separabit - Whom Virtue Unites, Death Cannot Separate." My Latin is truly miserable, so I'll leave it to others to adequately recaption this story as "Death Unites Masons Who Have Otherwise Remained Separated." 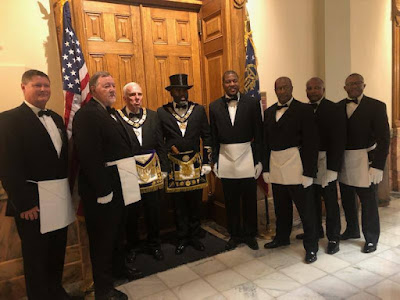 Let us all hope that this brief moment of unity and brotherhood is only the first opportunity for Georgia's brethren to explore greater cooperation and eventual recognition, and not just a momentary, fleeting contact never to be repeated. If recognition came from the the seeds planted at this particular funeral, there would be a certain symmetrical, symbolic properness to it.

(My apologies for not knowing who the original source was for these photographs - I assembled them from various Facebook posts today. Let me know and I will properly credit them. And yes, everyone properly wore their masks for the service, only removing them for the photos.) 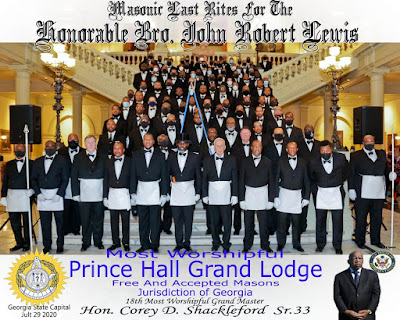