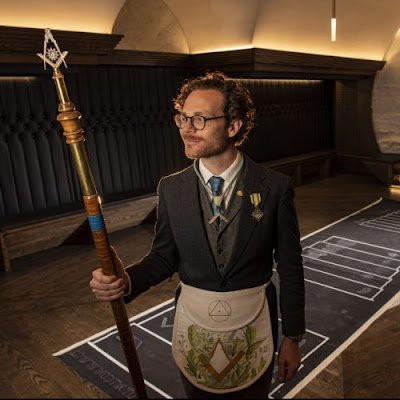 If your grand lodge magazine continues to be dominated by creaky stories about George Washington and dead Masonic baseball players, have a look at the latest issue of California Freemason magazine. 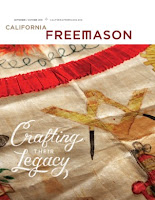 They have been going out of their way in recent years to highlight current active Masons from all walks of life today, along with their talents and accomplishments. I've always been a sucker for stories and images of the endless variety of material art and culture created by fellow Freemasons. This most recent issue (September/October 2019) takes full advantage of the many talented Masons involved in the arts across California, and the magazine is dedicated to the general subject of Masonic folk art, both antique and modern.

To wit: Logos Lodge No. 861 in San Francisco is top heavy with artistic members, and this relatively new lodge encourages them to channel their abilities to adorn its meeting space. Affinity lodges made up of artists, writers, musicians, actors and others were common in the US and Europe in the late 19th and early 20th centuries, and Logos Lodge is continuing that tradition today. They have specifically declared the lodge to be a center of creativity.

From The Do It Yourself Lodge by Ian Stewart:

James Tucker is describing the new aprons that members of his lodge, Logos Lodge No. 861 in San Francisco, have designed. They’re an attractive green, gold, and white on the outside—a square-and-compass logo shrouded in Acacia leaves beneath a triangle-within-a-circle design on the flap. On the reverse side, they’re black leather with a white, hand-painted skull design. Each one is hand-painted and unique to the wearer; a symbol of their higher existence is included on each apron. Tucker himself has painted several such designs for members, but, he confesses, “I’d rather they do it themselves.”

That’s become something of a mantra for Logos Lodge, the two-year-old group that may well be the most artistically inclined bunch in the state. Since their founding in 2018, members of Logos Lodge have taken it upon themselves to design and create just about every piece of Masonic regalia they own, among them the hand-painted aprons; gavels; a lodge banner; and their lodge identification jewels, which feature a spherical checkerboard floor beneath a radiating star-within-a-triangle design, itself inside an ornate square-and-compass. “Creativity is so special to a lodge,” Tucker says. “We’re founded on that.”

Logos’ handmade artistic sensibility has permeated other facets of lodge business, as well: As candidates complete their degrees, their accompanying work pieces have begun tending toward mixed media. Patrick Clos, raised in 2018, wrote and performed songs for each of his degree conferrals. (In his spare time, Clos is the frontman of the rock group Cocktails.) Another member, Kevin Jones, is a videographer by day and has been planning a video piece for his degree.

But perhaps the piéce de resistance for Logos is the 20-foot-long floor cloth that members of the lodge designed and hand-painted. The carpet, which candidates are guided along during their Entered Apprentice degree, alludes to King Solomon’s temple as an allegory for the soul’s journey. Lodge Chaplain Robert Haines helped design the piece, with an assist from Tucker, who hand-painted it with a wax-based crayon of sorts... 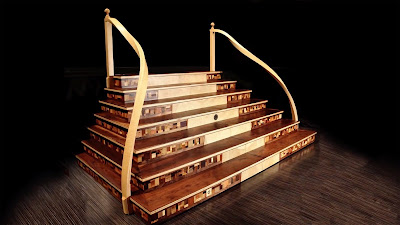 There are also articles about the artwork of floor cloths and Masonic carpets of the 1800s; a Masonic board game; Masonic lapel pins; a presentation of folk art examples currently displayed at their Museum; and modern craftsmen creating new treasures for the fraternity. Even an interview with Brother Bryan Godwin, a modern day artist working in Visual Effects creation (VFX) for some of the top blockbuster movies and TV shows dazzling audiences these days (Joker, Westworld, Dawn of Justice, and lots and lots more). 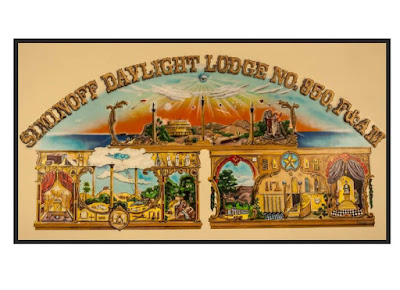 I'm sure your own jurisdiction has its share of equally talented artists and craftsmen creating their own Masonic works of art. Such brethren deserve recognition and to have their work seen by a wider audience besides their own lodge members. Your state magazine is the perfect venue, and such stories and images are far more interesting to your Masons than tiny photos of men shaking hands, or sticking lapel pins or medals on each other in photos taken from across the room. Why not use those full color pages every month or two to highlight the beauty created by our own inspired brethren?

Hats off to Alan Casalou, California's Grand Secretary and Editor in Chief, and the entire crew of the California Freemason magazine for putting together what is consistently one of the top Grand lodge-sponsored magazines in the world.