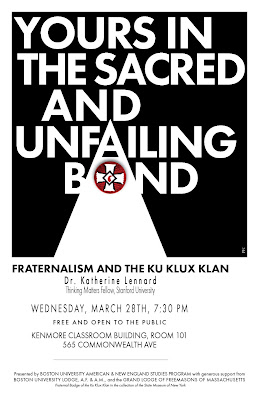 To the average, casual scanner of internet headlines these days, when the phrase "Ku Klux Klan" pops up, there's an immediate snapshot association in the mind of a pathetic handful of tobacco-dipping yahoos in a clearing in some rural Southern backwoods, burning a cross, and yelling at each other about white purity while their wives heat up the baked beans. That's the contemporary Klan that networks like A&E and the Discovery Channel go out and videotape for their TV shows.

If the reader encountered the Klan in high school or college, they probably know about the Klan's origins and rampant violence of the post-Civil War period, and its 1960s revival as a murderous group battling against the 1964 Civil Rights Act, with its bombings, kidnappings and killings. 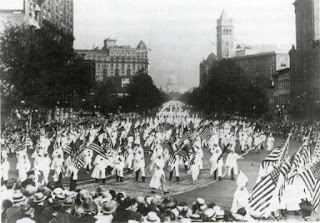 But there was a middle period that gets glossed over in American history. It tends to get briefly mentioned, if at all, even though it provided the greatest photo opportunity "the Klan" ever had — the 1925 march on Washington, DC, with 125,000 Klansmen swathed in their robes, marching with American flags down Pennsylvania Avenue with the Capitol Dome in the background. That second period of the Klan doesn't get talked about very often, and there's a reason why: it was a national humiliation during the Golden Age of Fraternalism, when Klan membership soared into the millions, all across the nation. At its height, the Klan of the 1920s had between 4 and 5 million members (some estimated 15% of the U.S. population), and an awful lot of great-grandfathers out there who were fine, upstanding men paid their annual klecktokens and carried a KKK dues card from the Invisible Empire in their wallets for about four years or so. After all - it was just another club...

That period of the Klan had a momentary success in America because it rode on the back of the Golden Age of Fraternalism. The Klan of the 20s used commissioned salesmen to spread across the country and enthusiastically sell their newly polished image of "100 Per Cent Americanism" as an ultra-patriotic, anti-immigration, Christian fraternity, with ritual, uniforms, its own peculiar terminology, and bilious officer titles, just like the Odd Fellows, Knights of Pythias, the Woodmen of the World, or the Freemasons. In fact, in many states their salesmen specifically targeted Masons for their promotional efforts. It's far more complex than this simple explanation, for a variety of political and social reasons that all converged in the eight years before the Depression struck, but the result was that the KKK became a very brief, but very powerful and influential political force in the 1920s. (I have an extensive chapter in my new book Heritage Endures that covers this turbulent period, because Indiana had the greatest percentage of its citizens who were both proud Kluxers and Freemasons, including two major players in their national organization.)

Boston University has announced its 4th annual Fraternalism Lecture at the end of this month. On March 28th, Dr. Katherine Lennard of Stanford University will present a lecture entitled “’Yours in the Sacred and Unfailing Bond: Fraternalism and the Ku Klux Klan” as the 2018 annual fraternalism lecture sponsored by the American & New England Studies Program at Boston University. The lecture will take place at 7:30 in Room 101 of the Kenmore Classroom Building, 565 Commonwealth Ave, in Boston Massachusetts. It is free and open to the public.

Dr. Lennard holds a Ph.D. in American Studies from the University of Michigan. Her dissertation examined the design, production, distribution, and use of Ku Klux Klan regalia in the first third of the twentieth century.

The annual fraternalism lecture series is made possible through the generosity of Boston University Lodge, A.F. & A.M. Previous lectures in the series have been presented by David G. Hackett, Joscelyn Godwin, and Corey D.B. Walker.

For more information, or to make a contribution to support future lectures, contact William D. Moore, Director of the American & New England Studies Program at moorewd@bu.edu.
Written by Christopher Hodapp at 3/06/2018