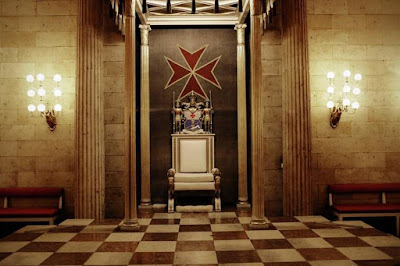 According a story today on the Ekstra Badet website, a 67-year old Norwegian man has been arrested in Oslo pending extradition to Copenhagen, Denmark and is being held by authorities for attempting to blackmail Danish Freemasons. Details of the case have not been released, but the story reveals that the man secretly videotaped Masonic ritual ceremonies in Denmark and Norway in 2016. In April, he threatened to publish the videos, but attempted to blackmail the Danish fraternity for 33 million kroner (about US$5 million) in return for not making them public.

A closed-door court hearing was held today in Oslo to determine potential charges of extortion. It is not being revealed publicly whether the Masons actually paid the man, nor if he is a current or former member himself. It's unclear from the story whether this involved a single lodge, the Grand Lodge of Denmark, or even Norwegian Masons, as well.

My apologies for any errors in translation and interpretation. Anyone who is able to correct any details, please feel free to contact me.

Today, word has come out of Norway that the man in question was, in fact, a member and a 'trusted officer' of the Norwegian Order of Freemasons (Den Norske Frimurerorden) at the time of his 'alleged' activities. Upon his initial arrest and the allegations coming to light last month, he was immediately expelled. As this story unfolds, it bears a remarkable (and pathetic) resemblance to the plot of Dan Brown's novel, The Lost Symbol.

Equivalences to Norway's own Vidkun Quisling have been pretty much irresistible all day long.

Unlike numerous Anglo-Saxon jurisdictions for the last three centuries, those working the Scandinavian Rite have not had their quite distinctive rituals continuously exposed and exploited, which has led to more than one of these incidents in recent history. I am told that there have been at least three high-visibility attempts to expose the ritual in Norway in the last two decades. While non-members continually obsess on this in their misguided misunderstanding of Masonic secrecy and its purpose in the first place, for an officer to do this is the worst sort of tragic betrayal of the most fundamental concept of trust and personal honor. Sadly, since everybody has a video recorder in their pockets these days, I suspect it will only continue to happen.

There has been an ongoing furore in some U.S. jurisdictions for the last decade or so over whether it is acceptable for members to bring a gun into lodge. Many have recommended a gun safe in the Tyler's Room as a reasonable solution. Perhaps what we all really need going forward now is a phone safe.
Written by Christopher Hodapp at 6/06/2017