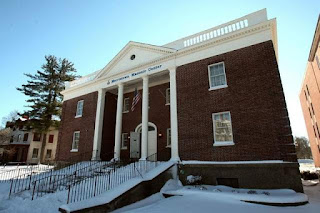 Cincinnati Lodge No. 3 in Morristown, New Jersey narrowly escaped being burned to the ground last week, thanks to the bravery of RW Brother Drew Jardine. From last Sunday's Daily Record:


Drew Jardine planned to snow-blow around the Morristown Masonic Center Friday night but said he wound up wrestling with a man who burst into the center carrying jugs of gasoline and hollering that he would burn the place down.
Morristown Police Capt. Steve Sarinelli identified the suspect as John Mowbray, 50, of Morris Township.
“It’s unclear what his motive was,’’ Sarinelli said.
There was vandalism to the Masonic Center a few days before Friday’s incident and police are exploring a possible connection between Mowbray’s alleged break-in and the earlier criminal mischief, Sarinelli said.
In an interview Saturday morning in the sitting room of the circa-1930, Colonial center on Maple Avenue, Jardine said he was waiting for the snow to wane so he could clear the sidewalks when he heard the front door being forced open around 10:20 p.m.
"It's a stroke of luck I was here. The building could have been burned down," said Jardine, 57, a member of the center's building committee.
Jardine said he confronted the intruder, a stranger in his fifties, who was carrying four quarts of gasoline in milk containers. Jardine said he exchanged blows with the man, who was trying to get up stairs to the center's second floor, and he was able to wrestle him to the floor.
The jugs fell during the scuffle and one broke open so that the center's sitting room and foyer still reeked of gasoline Saturday morning.
Jardine said he managed to hold the man on the ground while he called police on his cell phone. Police confirmed that the suspect was taken into custody, charged with attempted arson and burglary, and lodged in the Morris County jail on $100,000 bail.