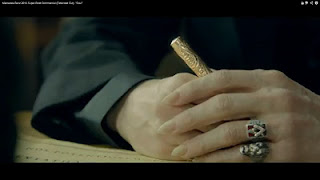 I am still getting caught up after being on the road to Masonic Week for 10 days. While I was gone, Mark Koltko-Rivera in New York broke the story that MercedesUSA was airing a Super Bowl commercial entitled "Soul" that featured Willem Dafoe as Satan, and two shots that clearly showed the Horned One sporting a Masonic ring on his pointed fingernailed hand.

Thanks to the complaints of many Freemasons, Mercedes altered the edit of the commercial for the Super Bowl airing removing the closeup of the ring, and issued an official apology on their Facebook page:


We apologize to anyone offended by the use of the ring worn in our commercial, 'Soul,' that ran during the Super Bowl.

It was not our intention to make any association with the Freemasons or any organization. In fact, neither we nor our advertising﻿ agency were aware that the ring could be associated with the Freemasons. To avoid any confusion going forward, we will modify the commercial prior to any future television airings.

While I wish the apology had been in a more widely seen venue, it appears that enough voices can make a difference. It remains more than slightly risible for them to claim that there was no intention to associate the Freemasons with Old Scratch, because they clearly did.

Mercedes still has the extended 1:50 version on YouTube, with the ring featured in two shots. See it here.
Posted by Christopher Hodapp at Saturday, February 16, 2013