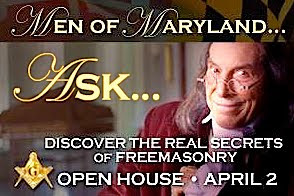 The Washington Times reports today on the Grand Lodge of Maryland's public relations and membership campaign.

From "Masons make no secret of a desire for new members" by Jordan Otero:

“We wanted to make an opportunity available for people to visit lodges and to find out more about what we are and what we do,” said Tom Foster, director of communications for the Grand Lodge of Maryland.

“There’s been a significant increase in petitions to join,” he said. “We’re at nearly double the petitions we had last year to date.”

He added that running advertisements and hosting open houses have made “a positive step in the right direction.”

Mr. Foster said there might not be a secret Masonic gold hoard hidden beneath New York City, as portrayed in “National Treasure,” but there is a “national treasure of Masons” that comes with Freemason membership.

“We have a saying that says, ‘Find your inner greatness,’” said Mr. Foster. “You can do that through Masonry.”

The Grand Lodge of Maryland purchased the broadcast rights to the tasteful, well-produced, and very successful campaign created by the Grand Lodge of Massachusetts, www.askafreemason.org which features Ben Franklin in radio, TV and extended internet spots.