The Grand Master of Michigan, MW Frederick E. Kaiser, Jr., has withdrawn official recognition of the Shrine there, and it has been declared clandestine and illegal. Michigan Masons may not attend tyled Shrine meetings in that state.

The problem stems from a Mason who was expelled by the Grand Master in July allegedly for pleading guilty to a crime punishable by incarceration of one or more years, and per Michigan's Masonic rules. Unfortunately, the Elf Khurafeh Shrine and the Imperial Shrine (Shriners International) in Tampa didn't agree and kept the suspended Mason as a full member of the Shrine. A slight complication: he's the current Potentate. He had pled guilty to possessing and operating gambling devices, and probably won't be sentenced until February. However, since he did plead guilty, the GM expelled him. The Shrine did not.

From the GM's letter of November 23rd:

The expelled Mason, by action of Elf Khurafeh Shrine, headquartered in Saginaw, Michigan continues to be a member and Potentate of that Shrine. Elf Khurafeh’s action to retain him was subsequently upheld by the Imperial Potentate. This situation exists despite the reputed requirement that a member of the Ancient Arabic Order Nobles of
the Mystic Shrine (Shriner’s International) must also be a Mason in good standing.

Discussion was initiated with the Imperial Potentate, and counsel for the Imperial Shrine. The Grand Lodge of Michigan explained its position, and requested that the Imperial Potentate reconsider his decision, given information previously unavailable to him. Unfortunately for all concerned and with heavy heart, I must state that no modification of
his position, nor of Elf Khurafeh Shrine’s, has occurred.

§3.8.2: Any and all organizations, associations, or persons within the State of Michigan, professing to have
any authority, power or privileges in Ancient Craft Masonry, not fraternally recognized by this Grand Lodge, are
declared to be clandestine and illegal, and all Masonic intercourse with any of them is prohibited.

§8.1.2.9: All Master Masons under the jurisdiction of the Grand Lodge of Michigan who hold membership in
Ancient Arabic Order Nobles of the Mystic Shrine are forbidden to attend tiled Shrine meetings when there is in
attendance a suspended or expelled Mason.

It is therefore my order that no Mason who holds membership in a Michigan Lodge, or in a Lodge chartered by a recognized Grand Lodge who resides or sojourns in Michigan, may (1) attend any nonpublic function of any Shrine in Michigan or (2) have any Masonic interaction of any kind with any Shrine organization in Michigan. Furthermore, no Shrine function or activity will be afforded a special privilege not afforded any other unrelated organization that is allowed to use a building dedicated to Masonic purposes, or on the grounds of a building so dedicated.

Violation of these provisions by a Mason under the jurisdiction of the Grand Lodge of Michigan is punishable by charges of un-Masonic conduct. 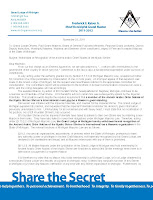 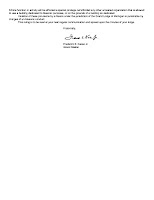