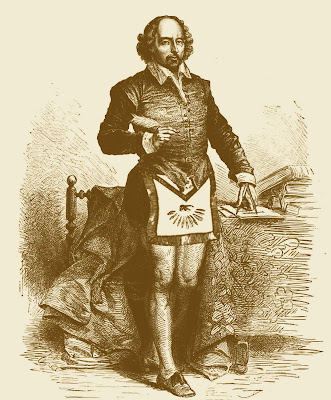 There are some who have attempted to link the Bard with the early formation of Freemasonry, either by claiming he was actually Francis Bacon, or by examining lines from his plays.

"You have made good work, you and your apron."
William Shakespeare -- Coriolanus
Have a look at some of these claims and decide for yourself:

Shakespeare and Freemasonry by Peter Dawkins

Was William Shakespeare A Freemason? by Robert I. Clegg

Was Shakespeare a Freemason?: Masonic Symbolism in Macbeth, by Bro. Robert Guffey

For those who have never known the source of one of the most moving lines found in our ritual, concerning the level of time, here is one of his most famous soliloquies, from Hamlet. These few lines are some of the most quoted and adapted words in English literature.

To be, or not to be: that is the question:
Whether 'tis nobler in the mind to suffer
The slings and arrows of outrageous fortune,
Or to take arms against a sea of troubles,
And by opposing end them? To die: to sleep;
No more; and by a sleep to say we end
The heart-ache and the thousand natural shocks
That flesh is heir to, 'tis a consummation
Devoutly to be wish'd. To die, to sleep;
To sleep: perchance to dream: ay, there's the rub;
For in that sleep of death what dreams may come
When we have shuffled off this mortal coil,
Must give us pause: there's the respect
That makes calamity of so long life;
For who would bear the whips and scorns of time,
The oppressor's wrong, the proud man's contumely,
The pangs of despised love, the law's delay,
The insolence of office and the spurns
That patient merit of the unworthy takes,
When he himself might his quietus make
With a bare bodkin? Who would fardels bear,
To grunt and sweat under a weary life,
But that the dread of something after death,
The undiscover'd country from whose bourn
No traveller returns, puzzles the will
And makes us rather bear those ills we have
Than fly to others that we know not of?
Thus conscience does make cowards of us all;
And thus the native hue of resolution
Is sicklied o'er with the pale cast of thought,
And enterprises of great pith and moment
With this regard their currents turn awry,
And lose the name of action.--Soft you now!
The fair Ophelia! Nymph, in thy orisons
Be all my sins remember'd.