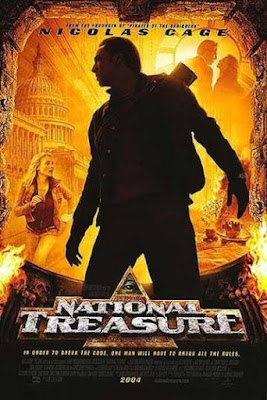 ComingSoon.net is reporting that National Treasure 3 is alive and under development. Gone is the writing team of the Wibberley's (Charlie's Angels: Full Throttle, Bad Boys II, The Shaggy Dog remake, the Fantastic Voyage remake, the Moby Dick remake... see a trend here?), who have been replaced by Carlo Bernard and Doug Miro (who have recently penned The Sorcerer's Apprentice with Nicholas Cage, and Prince of Persia: The Sands of Time). Back will be producer Jerry Bruckheimer and director Jon Turteltaub, and presumably, Nicolas Cage, Justin Bartha, Diane Kruger and Jon Voight.

In spite of rumors from three years ago, Turteltaub said this week the film will definitely NOT involve the search for Atlantis, but there is no clue about the story line. HitFix.com reported:

But the filmmaker and Bruckheimer take criticisms about the historical nature of the previous two films to heart. Especially since they have taken strict measures to use as many real clues making the overall process to write a "National Treasure" movie "shockingly" difficult.

"Everyone knocked the movie because it was fake, but everything they were knocking [was] actually true," Turteltaub says. "'Oh, those stupid Ben Franklin glasses...' We found those Ben Franklin glasses! He had that color thing. So, it's just about getting the story to work."

Interestingly, the young adult-pitched novelization of National Treasure: Book of Secrets featured several references to Freemasonry that were probably in the shooting script, but never made the cut.

No word on a release date yet for the new film.
Written by Christopher Hodapp at 4/05/2010