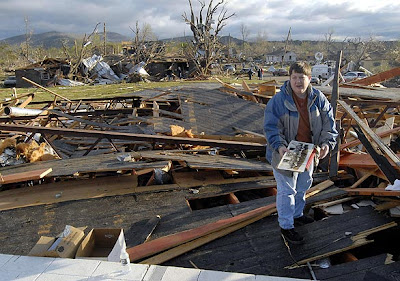 Dallas Lodge No. 128 in Mena, Arkansas, was destroyed yesterday after a tornado struck the building at about 8PM. One person was killed at the lodge, and at least two others in the mountain town. Thirty others were injured in the area. Homes were flattened, and the Mena courthouse was destroyed. Thousands remain without power today, and the national Guard is going door to door to check on residents.

According to KTHV-11 in Little Rock,

The Mena tornado's destruction hit Line Street the hardest. At the Dallas Masonic Lodge, the Order of the Eastern Star was having a meeting Thursday night when the storm came through. The 19 people inside only heard the tornado siren sound and say they had no time to take cover when the storm hit.

Thurman Allen, 79, of Mena said a woman at the meeting was killed when the roof of the building fell in. He said rescuers had to cut the roof away to recover her body.

Authorities have not released names of the dead.

Allen said that as the tornado hit the lodge, debris hit him in the head and knocked him to the ground. His wife, sitting nearby in a chair, was thrown to the floor.

The storm knocked over the lodge's cinder block wall, bringing down wooden roof joists, insulation and shingles over the people gathered for the meeting.

Fred Key, 37, of Mena said several people were injured as the winds blew through the hall. He said the winds took the shoes of some of the members. Key says rescuers arrived as quickly as they could but were blocked by pine trees that fell across roads in the area.

No word yet today on the name of the OES member who was killed.

Dallas Lodge in Mena was the mother lodge of Norris Goff and Chester Lauck—long forgotten today, but better known in the 1930s as the comedy team of "Lum and Abner," one of the most popular radio shows on the air between 1932 and 1954.

According to the 40/29 TV website, the three people killed in Mena were:

• Anna True Cress, 84, killed at the town's Masonic Lodge, where she was attending a meeting of the Order of the Eastern Star.
• Judy Lobner, 47, who died in her daughter's home. Myhand said Lobner's daughter was outside the home when the tornado hit, but survived.
• Albert Shaw, 61, who died when his two-story home was hit by the storm and collapsed.

The twice-monthly meeting of the Mena's chapter of the Order of the Eastern Star had been going on uninterrupted, the 19 people inside only faintly hearing the sirens through the building's cinderblock walls.
Attendee Thurman Allen said they were ready to get out of the building when the twister hit. The storm tore down the Masonic hall's walls, collapsing the roof on one woman, Anna True Cress, killing her.
The winds pulled the shoes off some women who were at the meeting.