An outstanding post from Tuesday by Tom Accuosti – Go Take A Pike – on the subject of Uncle Albert and the misuse of his, and others', writings about Freemasonry as quotable sources by non-Masons. I don't expect for one second that it will get through to the anti-Masonic crowd that uses these quotations like they come from some official Masonic source as Law. But maybe if we repeat it as often as they haul out Taxil hoax misquotes, perhaps the undecided majority will see the anti tactics for the frauds they are. Anyone whose fingers are just itching to smear Freemasons with Pike's musings on symbolism, history, religion and speculation, needs to read Tom's post first.

Not that they will.

I don't care if they want to argue about it based on true statements or on what are the real words used in Grand Lodge materials or rituals. But to cherry pick tomes like Morals and Dogma for some offending (and often made up!) paragraph, and to hang the fraternity with it is infantile, dishonest and just plain idiotic. 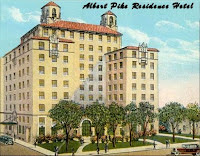 Completely off the track sideline: who knew there is an Albert Pike Residence Hotel in Little Rock? It seems to be a retirement home, but the ballroom looks like a happening place for weddings. But what's curious about its heritage is that, using Pike's name, it was a Baptist Ministry for a while. Which should come as a surprise to some of our less than enthusiastic Baptist critics. Jinkies! Now how did that happen with all that Luciferian stuff going 'round?
Posted by Christopher Hodapp at Wednesday, August 29, 2007