Italian Priest Apologizes To Jews: Says he Meant To Insult Masons Instead 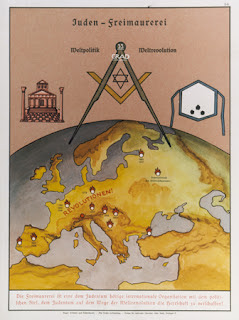 Well, it wouldn't be a proper Monday morning without one of these coming across the wires.

One of Italy's best-known priests has apologised for accusing a liberal Jewish lobby of trying to weaken the Roman Catholic Church, saying he meant to refer to a a Masonic lobby instead.

The gaffe is the latest from 82-year-old Pietro Gelmini, a priest known for his drug rehabilitation centres and powerful political allies in Rome, after he confirmed last week that he was being investigated for sexually abusing young men.

Thanks so much, Father. I guess that's the new strategy when you're accused of sexually abusing young boys - deflect by quoting from the Eichmann playbook: "All Jews Masons, All Masons Jews." As a Catholic and a Mason, I don't know which part of your behavior to be disgusted with first.
Posted by Christopher Hodapp at Monday, August 06, 2007