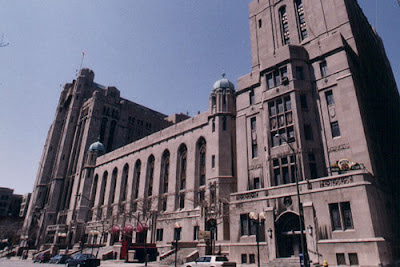 The Detroit News reports this morning (a little prematurely, it seems, but a scoop is a scoop), that Little Caesar's Pizza founder Mike Ilitch seems to be moving closer with plans to take over the incredible Detroit Masonic Center. This is a huge development that could be the true savior of the largest Masonic building in the world.

Both the Shrine and the AASR Valley of Detroit abandoned the building over the last two years (which seems to have turned out not so well for either of them, as costs for their new homes have skyrocketed). More important, they seem to have fled just as the neighborhood may be poised for a huge influx of new investment:

"Ilitch Holdings Inc.-- the billion-dollar family empire of sports, entertainment, pizza and real estate in downtown Detroit -- hopes to venture into a long-abandoned stretch of the city: the Cass Corridor.

Ilitch's Olympia Entertainment is negotiating to take control of the iconic Masonic Temple, a city landmark mired in so much debt its owners, the Masons, face losing the building. The deal could be announced within a week to 10 days, said Bill Betz, president of the Masonic Temple Association, which would continue to own the 16-story landmark.

An Ilitch-run Masonic could be an energizing development for an area trapped in poverty and decay, according to city, business and neighborhood officials. It is the one spot left in the city core that could most benefit from a business titan who revived the Fox Theatre area 20 years ago, they say.

A Masonic deal could be transformational, Betz said.

"In five years -- the whole neighborhood -- you won't recognize it," he said.

Security and money from entrepreneurs willing to back projects near an Ilitch endeavor will likely follow the Little Caesars Pizza owner into "the Corridor," developers and city officials said.

Kudos to the dedicated brethren who have worked tirelessly behind the scenes to save the Masonic, instead of just turning their backs. The Masonic is the center of Detroit's appalling Cass Corridor, a blighted part of the city that was once a thriving center of the community. There are so many incredible architectural gems in the area, but as the Masonic has gone, so has the neighborhood. With this new development, it looks like Detroit's Blue Lodges and York Rite may be at the center of things again. Instead of fleeing, some have come home again. Perfection-Mosaic Lodge No. 530 has recently come back to the Masonic.

Be sure to check out the book, Detroit's Masonic Temple by Alex Lundberg and Greg Kowalski.
Posted by Christopher Hodapp at Tuesday, August 28, 2007