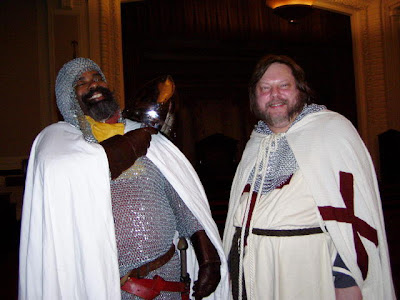 That's Sir Knight Robert Coleman, Jr. and I hamming it up at Thursday night's organizational meeting at Raper Commandery for a new Knights Templar re-enectment unit.

It's one of those things I've wanted to help put together ever since my knighting several years ago, but never had the time. It seems it was a parallel notion in Robert's head as well, as he is an active member of the Society for Creative Anachronism. Things came together at a Templar battalion meeting two weeks ago when Sir Knight Jim Dillman finally said 'let's quit talking about it and do it!'

It is our goal to confer the Order of the Temple in period-correct chain maille, helmets and tunics with proper broadswords. This unit has the potential to interest a whole group of men who have not been active in the York Rite, or the KT specifically, as well as attracting a new generation of men. Robert is our armourer, and old helium hand was volunteered to be the unit historian. I am absolutely ecstatic at the amount of enthusiasm this project has generated in a very short time. Now, if I can just find a mail-maker who can make me a hauberk that will accommodate my expansive pot roast...
Posted by Christopher Hodapp at Saturday, March 31, 2007