Florida's Grand Master John E. Karroum has announced the reinstatement of fraternal relations between the Grand Lodge of Florida F&AM and the Gran Logia de Cuba... ONE MORE TIME.

If this sounds like a song you've heard before, you're not wrong. On December 10, 2016, the Grand Lodge of Florida restored fraternal relations with Cuba for the first time in 56 years. The Gran Logia de Cuba was formed in 1951 from two previously separated ones, eight years before the Castro revolution, and it has remained in operation and regular in practice for all those years. The U.S. government severed diplomatic relations with the Communist dictatorship of Fidel Castro in 1961, and American grand lodges quickly followed suit. A large number of Florida Freemasons are either from Cuba originally or descended from Cuban immigrants, so the restoration of recognition in late 2016 was warmly welcomed. But despite the long-sought after renewal of amity, all was still not well.

An ongoing controversy stemmed from lodges operated within Florida made up of exiled Cuban Masons who are not affiliated with the Grand Lodge of Florida F&AM. Florida's various grand masters regarded this as an invasion of their territory by Cuba, and the argument has gone on for some time. (Here is a link to a letter regarding the matter from back in 2014.) The Grand Lodge of Florida largely looked the other way at the operation of the exile lodges over the years with an understanding that they would cease once relations between the island nation and the U.S. were normalized and the two Grand Lodges reconciled. That apparently did not happen, at least as quickly as the former GM of Florida wanted it to in early 2017.

So, in February of 2017 Florida's then-Grand Master, MW Stanley Hudson again withdrew recognition from the GL de Cuba for their failure to "renounce the clandestine lodges operating" in Florida's jurisdiction. The recognition had lasted less than three months.

Meanwhile, an increasing number of U.S. grand lodges have been again recognizing the GL de Cuba ever since the United States government began re-engaging with Cuba in late 2014.

This new letter from GM Karroum, dated August 29, 2018 (see below) explains that he was authorized by Florida's Grand Lodge to restore relations with Cuba, and that he has determined that the GL de Cuba has "completed the steps agreed upon and met the requirements set forth [on December 10, 2016]."

Congratulations to all parties involved in resolving this issue. 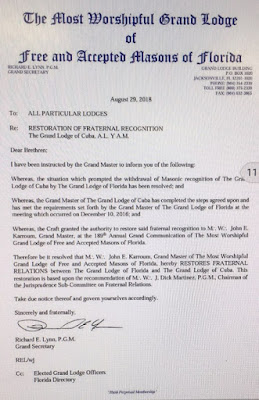