Bringing Back Our Treasures 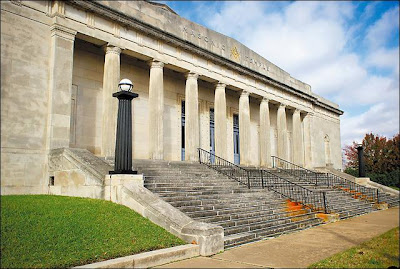 In her article in the Muskogee Phoenix last Sunday, Bringing Back A Treasure, author Wren Stratton makes a profound statement: "It must have been quite a leap of faith in 1926 to build our Masonic Temple."

Her article describes with care the details of the Muskogee, Oklahoma Masonic Temple, with its stage and dance floor, and the decades of memories it has created for Masons and the whole community. And it tells the story so many of us have seen happen over the years with our temples. Membership numbers fell, brethren moved to the suburbs. Other charities took precedence over maintaining and improving our own buildings. Other more modern facilities lured events away from our magnificent places because of our failure to air condition them and put in elevators and wheelchair ramps. And finally, the generation that grew weary over leaky roofs and antique boilers looked for any possible offer to unload what they regarded as an expensive eyesore. Too many of our irreplaceable temples fell to the wrecking ball because of poor planning and a refusal to recognize that it takes work to keep these places alive.

Like so many stories across the country, Ms. Stratton finds a small group of excited Masons who are looking to the future, who recognize the worth of these temples, and who are looking for ways to save them. The story is repeated in dozens, if not hundreds, of towns across the US and Canada. Decades of neglect cannot be fixed by raising the per capita of renters by $10 a year. Air conditioning a building the size of Muskogee's will take a couple of million dollars, as it did in the New Castle Scottish Rite Cathedral in Pennsylvania, or as it is estimated for Indiana Freemasons Hall in Indianapolis. Modernizing the stages, lighting, electrical, plumbing, and the rest will take millions more.

Talk of raising millions during a recession is crazy. Like the two-year recession that began in 1910, during which the Scottish Rite broke ground for the House of the Temple in Washington DC. Just like the Scottish Rite was crazy in Indianapolis when they built the world's largest Scottish Rite Cathedral between 1929 and 1930, after the Great Depression hit.

It was worse than crazy.

It was a leap of faith.

A new generation of men are arriving in the fraternity every day, a generation that is asking uncomfortable questions about the dearth of Masonic education, criminally cheap dues, lousy food, bad ritual, dull meetings, and the rush to abandon the Masonic temples our grandfathers built for us and for our communities at great cost and sacrifice. They expected us to do even greater things, or to at least maintain what they left us.

Ms. Stratton says it best in her article:

Once you’ve seen her, you can’t help but be caught up in the romance of the building. She is a grand old lady and deserves our love and attention. I guarantee if we could pull the money together, she would make a wonderful addition to the arts venues of Muskogee. Maybe just one step at a time. . .

She’s been watching, as Muskogee grew and changed. She has seen an entire generation of folks born and died. The temple is waiting patiently for her moment once again to hold her rightful place in our community as a source of beauty and pride.