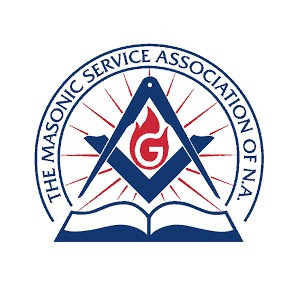 by Christopher Hodapp
The devastating tornadoes that tore across Arkansas, Illinois, Tennessee, and especially Kentucky over the weekend caused untold damage and destruction, and the death toll has risen to 88 as of this morning (according to the Associated Press). The state of Kentucky alone is reporting 74 deaths, and 100 people are still missing.
On December 13th, the Masonic Service Association of North America issued an official disaster appeal on behalf of the Grand Lodge of Kentucky, at the request of Grand Master James H. Gibson.
Click the image below to enlarge. 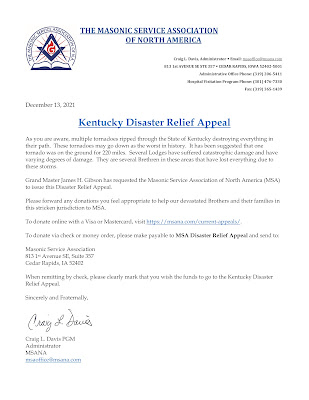 As you are aware, multiple tornadoes ripped through the State of Kentucky destroying everything in their path. These tornadoes may go down as the worst in history. It has been suggested that one tornado was on the ground for 220 miles. Several Lodges have suffered catastrophic damage and have varying degrees of damage. They are several Brethren in these areas that have lost everything due to these storms.
Grand Master James H. Gibson has requested the Masonic Service Association of North America (MSA) to issue this Disaster Relief Appeal.
Please forward any donations you feel appropriate to help our devastated Brothers and their families in this stricken jurisdiction to MSA.
To donate online with a Visa or Mastercard, visit https://msana.com/current-appeals/.
To donate via check or money order, please make payable to MSA Disaster Relief Appeal and send to:
Masonic Service Association
813 1st Avenue SE, Suite 357
Cedar Rapids, IA 52402
When remitting by check, please clearly mark that you wish the funds to go to the Kentucky Disaster Relief Appeal.

Remember that donations made through the MSA's official disaster relief appeals are fully tax deductible, and are considered preferable over independent fundraising programs like GoFundMe. Donations through the MSA are sent directly to the grand lodges that request an appeal, and the MSA does not charge any administrative fees - this has been part of the MSA's mission since its beginnings.
Donations may be made via check or online credit card payment. (VISA and MasterCrd only - no American Express)
UPDATE: According to Kentucky Senator Rand Paul's website, C.D. Ward Lodge 961's Masonic hall at 201 School Street, East Bernstadt in Laurel County is open as an official KYEM/FEMA disaster recovery center. "[The centers will be open] from 9 a.m. until 6 p.m daily to help survivors with property damage and other setbacks from the recent tornadoes."
Posted by Christopher Hodapp at Tuesday, December 14, 2021