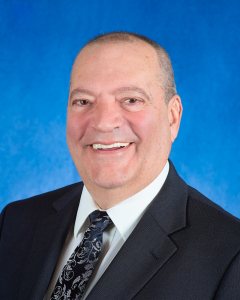 by Christopher Hodapp
MW Robert V. Monacelli, Grand Master of the Grand Lodge of New Jersey (photo above), has removed Senior Grand Warden Gary J. Olsen from office. According to the edict (Edict 14) circulated to the Masons in New Jersey, now-former Senior Grand Warden Olsen has been suspended from his elected position for failure to participate in official Grand Lodge events, committees, appearances and other responsibilities that are part of a grand officer's duties.

He is not suspended or expelled from the fraternity, but the edict forbids Olsen from being nominated to run for Deputy Grand Master in the November 2022 election.
Click the images below to enlarge. 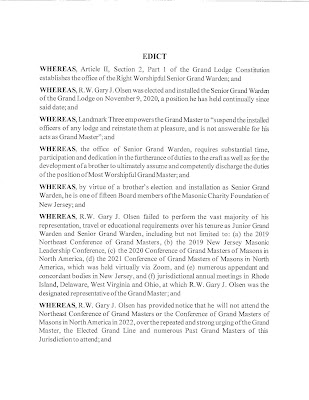 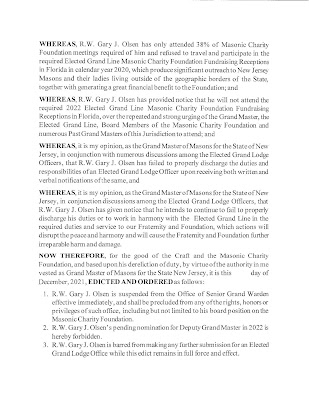 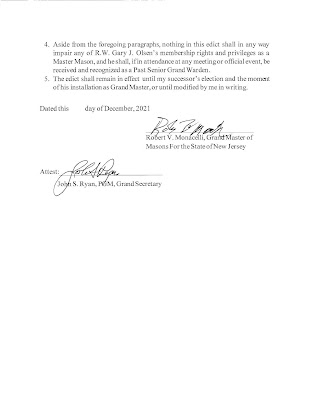 Like so many other grand lodges, the Grand Lodge of New Jersey was compelled to move its annual communication in 2020 and 2021 to comply with their state's COVID restrictions. Traditionally, they have met in April. In April of 2020, the COVID lockdowns were at their height and the then Grand Master, Greg Scott, pushed back the annual communication until November of 2020. The current line of officers were elected or named at that time.

In January of this year, GM Monacelli issued an edict stating that he and all current grand line Officers would remain in office for an additional twelve months, so November 2022 would be the end of their term. The reasoning for this was explained:

"the majority of the members of the current Grand Staff, who may, for the most part, not be likely to have another opportunity to participate on a Grand Staff, have been deprived of their opportunity to travel together, to coalesce as a staff, and to obtain the enhancement of Masonic light and knowledge customarily received through the experience of full participation in all of the planned programs and events throughout the State, beyond the boundaries of the Districts from which they respectively hail. . ." 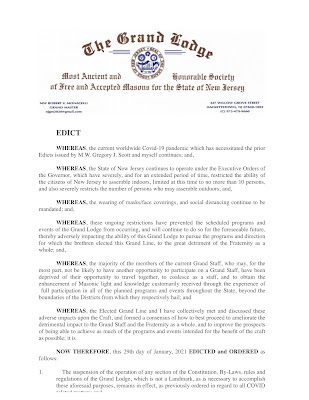 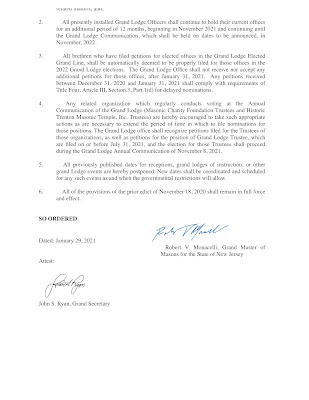 Grand Lodges all over the world have been wrestling with the unprecedented lockdowns and restrictions that COVID wrought. There have been complaints among New Jersey Masons that this edict violated their constitution, by-laws and other rules by extending the grand line for an additional year (something that the GM freely admitted he was suspending). But COVID and its accompanying restrictions have upended untold numbers of organizations that operate like our Masonic groups do, requiring the dedication of volunteer members.

Let's face it – we count on saints and masochists to govern our fraternity. The justification advanced by GM Monacelli's January 2021 edict may ring hollow to many, but advancing through the grand officers' line in the majority of jurisdictions can take seven or more years, with constant demands on a man's time to be away from home and family, and generally with no financial compensation of any kind. It's all well and good to say "the honor is its own compensation," but any Mason entering a grand officers' line can say goodbye to nearly every weekend of his life, and probably 7-10 nights a month for additional visits for six or seven years. The ultimate reward is the Grand Master's position, and it's even worse. The grand line can strain marriages, family life, jobs, wallets, emotions, retirement plans, and much more. No one should ever accept such a position casually, and there should never be any shame if a grand officer concludes that he cannot fulfill these obligations and resigns.

This is why the majority of grand lodges extended their grand officer terms in 2020 and 2021, even if they didn't come right out and say it the way GM Monacelli did. No one wants to spend the better part of a decade planning much of their life around their upcoming advancement to grand master, only to be ordered by the government to cancel all activity for the immediate future because of "the national emergency."