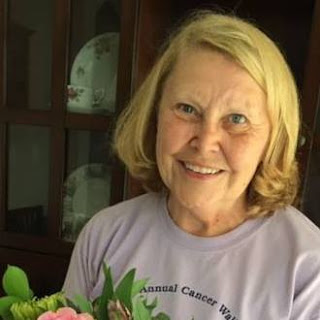 by Christopher Hodapp
Many Masons throughout North America know RW George O. Braatz and his wife Marilyn. Word came this week that Marilyn passed away Monday night, October 25th, at their home in Westerville, Ohio, after battling cancer for the last year. She was 76.
George served as Grand Master (1987-88), and then Grand Secretary (2000-2009), of the Grand Lodge of Ohio. And between 2011 and 2016, he served as Executive Secretary of the Masonic Service Association of North America. In that role, he and Marilyn traveled extensively, visiting scores of annual meetings and other grand lodge events promoting the MSA. 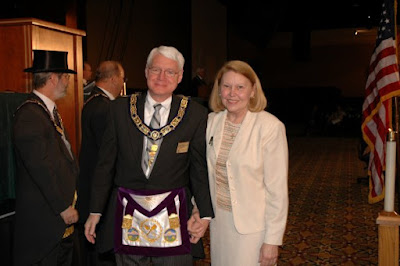 The Braatz's have both been espacially active in Masonic youth groups of Rainbow for girls and DeMolay for boys. There's no way to even estimate the thousands of lives they have touched over the years.
From her obituary:

A native of Genoa, Ohio, Marilyn was a 1963 graduate of Genoa High School, and a 1967 graduate of Bowling Green State University. She was employed at BGSU for more than 30 years in the Dean's office of the College of Education as a communications and program design specialist, and later as a development officer. In 2000, she became a public relations officer for the Ohio Department of Education in Columbus, until her retirement in 2008.
Mrs. Braatz was active for more than 50 years in the Order of Eastern Star in both northwest Ohio and later in central Ohio. She was twice the Worthy Matron of Grand Rapids (now Triune) Chapter, and later Worthy Matron of Worthington Chapter. She also had served each Chapter as its Secretary. In 1977, she was Deputy Grand Matron of District 7 in Lucas, Wood, and Ottawa counties. Later, she served the statewide Grand Chapter of Ohio Eastern Star on several committees and for eight years headed the statewide Chapter Excellence program for local Eastern Star development.
For many years she was the Mother Advisor of chapters of the Rainbow Girls in Bowling Green and Grand Rapids, and still today many women across the state refer to her as "Mom Braatz."

She and her husband, George, traveled extensively around the Ohio and the nation. In recent years, they have spent the winter season in Lakeland, Florida. She loved taking pictures of the places they went, as well as capturing on film many occasions in the lives of her children and grandchildren. She also enjoyed sewing and gardening.

George and Marilyn were married in 1967, and they celebrated their 54th anniversary in June. Please remember George and their sons David and Michael, daughter Wendy, and their grandchildren in your devotions.
Funeral services will be held next month on November 12-13. The family will receive friends from 5 pm to 7pm on Friday, November 12, 2021 at Schoedinger Worthington Chapel, 6699 N. High St Worthington, OH, where an Easter Star Service will start at 7pm. On Saturday November 13,2021 additional visiting hours will take place from 9am-11am with a service to follow at 11am at Grace Evangelical Lutheran Church, 100 E Schrock Rd, Westerville, OH 43081.
In lieu of flowers, the family requests that contribution be made to the Braatz Family Scholarship Program at Bowling Green State University.

Resquiescat in pace.
Posted by Christopher Hodapp at Thursday, October 28, 2021