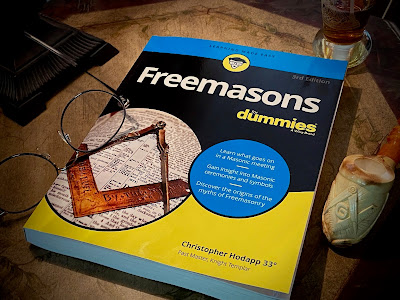 by Christopher Hodapp
It's been a busy – and occasionally frantic – couple of months around Hodapphäus that has resulted in few stories being covered here. Alice and I have had a convergence of four major publishing projects since June, along with several related road trips. Along with the summer release of RVs & Campers For Dummies, we've been prepping two of Alice's historical romance novels for release at the end of the year. But the big news here on the Masonic home front is that Wiley has just released the revised, 3rd edition of Freemasons For Dummies. Amazon began shipping today.
This is the second major revision of the book since it was originally published back in 2005. While the publisher merely wanted a minor updating, I took the opportunity to start at the beginning and completely revise the whole book. If you read it before, it's likely you won't detect much difference in the contents, besides updating things like membership statistics, Prince Hall joint recognition information and other developments in the fraternity over the last few years. I also updated grand lodge contact information and website addresses. But while all of that sounds minor, the new edition is some 40 pages longer than before. I'll leave it to the readers to decide whether that's good, or just an improper use of a wind instrument.
The most obvious change is the new look of the book. Wiley began updating the format of their For Dummies series a couple of years ago, and they wanted Freemasons For Dummies to reflect that new appearance. So there's a whole new cover, and the book itself has been redesigned on the inside. Sadly, gone are the Rich Tennant 'The 5th Wave' cartoons that marked the different sections of the book. And they no longer permit the small icons that mark tips, technical stuff, origins and other points in the text to have any customization. So, the Ask the Past Master and Myth Buster symbols we used originally have been replaced by generic ones. It's the price one pays for being part of a larger brand. If you never saw the original editions, you'll never miss them.
An odd choice is that they have moved the author's dedication, author bio, and most of all, acknowledgements to the very back of the book instead of their traditional placement at the beginning. I suspect this is because of Kindle editions that are set up to automatically open at Chapter 1, so Kindle readers never see any of the front matter in books these days, unless they deliberately flip back to earlier pages. So if you were acknowledged in the previous editions and don't see it in the new one, you still are there. It's now on the last pages instead of the first ones.
Finally, it wouldn't be 2021 without inflationary price increases. Like the new format, pricing the book is out of my hands. The new 3rd edition of Freemasons For Dummies now lists for US$24.99, and US$15.00 (Kindle). If your lodge, grand lodge or research group is interested in bulk order pricing, let me know. Big orders are best done through Wiley's customer service department, and I can usually score you a discount code.
Meanwhile, the 2nd edition of Freemasons For Dummies remains in some inventories around the country and will continue to be sold until those run out. If you are looking for a better deal, Amazon is currently selling it for US$16.49 until those stocks are depleted. He who hesitates is lost. Or is at least charged full retail.
Posted by Christopher Hodapp at Monday, October 25, 2021