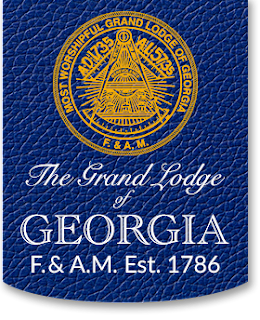 by Christopher Hodapp(THIS STORY HAS BEEN UPDATED OCTOBER 27, 2021 6:37AM TO ADD DOCUMENTATION AND VISITATION RESTRICTIONS)
I've had three different sources attending the Annual Communication of the Grand Lodge of Georgia F&AM today inform me that the assembled brethren voted overwhelmingly to officially extend recognition to the Most Worshipful Grand Lodge of the Jurisdiction of Georgia. The recommendation was made by the Committee on Recognition, there was no discussion, and the proposed recognition passed "by a landslide." 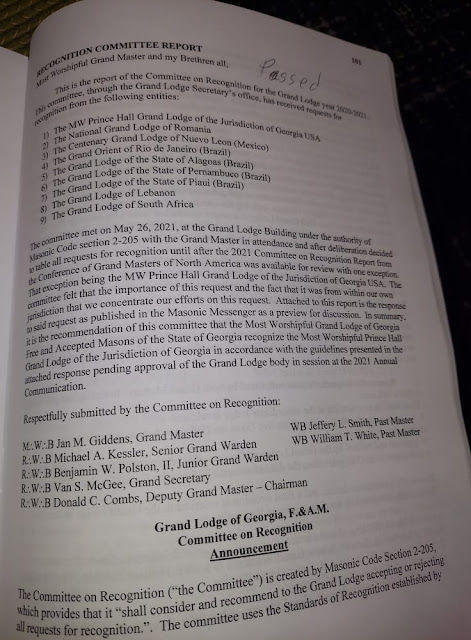 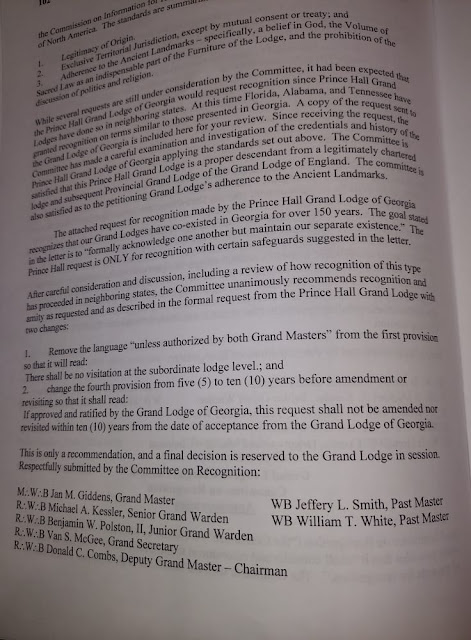 Still too early yet for many details beyond the recommendation and the vote. However, a couple of documents leading to the vote contain a couple of curious items.
Below is the request for amity/recognition sent to the Grand Lodge last December by Prince Hall GL of Georgia's Grand Master, MW Corey D. Shackleford. My apologies for the fuzzy quality of images. Click them to enlarge: 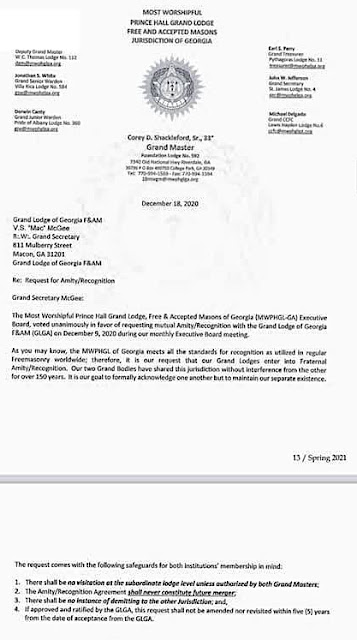 GM Shackleford states in his letter that their goal is to achieve formal acknowledgement of each other's organization as legitimate, "but to maintain our separate existence." The request included the following "safeguards for both institutions":
In essence, the request seems to simply be that the MWPHGL of GA just doesn't want to be called clandestine or irregular anymore, but not much else. And, as is often the case, they seem very concerned that the big fish might eventually swallow up the littler fish if the Prince Hall brethren get to visit the mainstream lodges.
Or as the old World War I song went, "How are you gonna keep them down on the farm once they've seen gay Paree?" 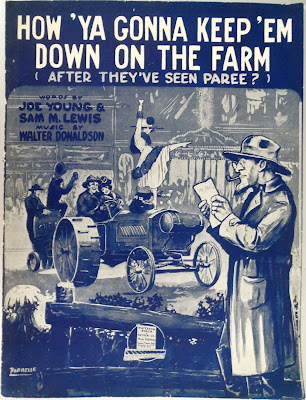 When the Grand Lodge of Georgia's Commission on Recognition took up the Prince Hall GL request, they added a couple of changes to that list of "safeguards" that are even a little more restrictive: 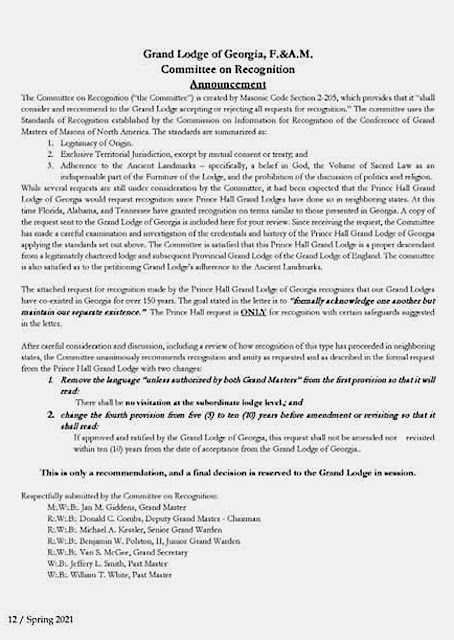 To wit:
Now, nobody has ever been reckless enough to stick me on a Jurisprudence Committee, but my albeit flawed understanding has always been that the assembled grand lodge voting members cannot legally prevent action being taken by a succeeding grand lodge for any period of time in the future. That's possibly a jurisdictional difference, but I'd be shocked if that really turned out to be backed up by either of the two Georgia grand lodge constitutions. You can't insist that future grand lodge members can't ever pass new legislation - or you can't enforce it, anyway. It's like a dying man trying to discipline his unborn grandkids by drawing up an odious will. He might feel victorious when he signs it, but once he's dead, he can't prevent them from installing a urinal and a dance floor over his grave once he joins the Choir Invisible. "The Grand Lodge" officially ceases to be when the gavel falls at the annual communication, and does not exist again until the opening gavel of the next year's meeting. The rest of the year, the Grand Lodge is invested in the Grand Master.
(Paging Glenn Cook...)
In fairness, these types of limitations forbidding visitations between mainstream and Prince Hall Grand Lodge members for a fixed "cooling off" period have been more common in recent years, and are almost always requested by the Prince Hall Masons, not vice versa. The approach is to get everybody's members comfortable with the joint recognition idea and hopefully weed out the truly hardcore critics on both sides who would rather curl up and die than let "one of those guys" visit his lodge. After all - after telling your members for 150 years that the other grand lodge in your state is clandestine and irregular, you're going to have members who aren't exactly going to wake up tomorrow morning singing the Rainbow Bright Unicorn song when you announce that everything has changed now.
What seems to be turning into a pattern is that these limitations are agreed to, everybody finds out that Masons are all pretty decent folks in both organizations after all, and the imagined horrible incidents everybody was afraid of don't materialize. The truly offensive naysayers stay home or demit, or at least learn to hold their wagging tongues. And usually within two or three years, the ban on visitations get lifted.
As I wrote many years ago, getting a grand lodge to change is like steering an aircraft carrier: they're slow to change course, hard to steer, and take forever if you want to stop them.
Nevertheless, the baby step has been taken, and the brethren of Georgia's two legitimate grand lodges are to be commended at last.
And then there were five... 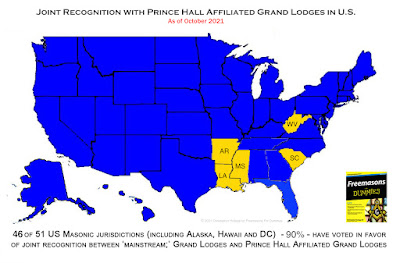