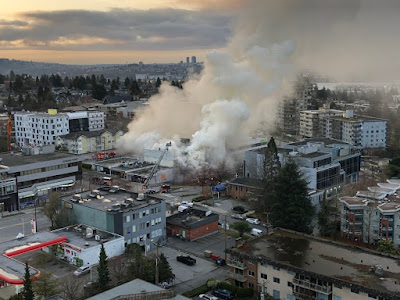 The second of three Vancouver Masonic halls that sustained major
damage from arson fires on Tuesday. (Photo: Carol Reimer)
by Christopher Hodapp
(UPDATED March 31, 2021 at 8AM: This story was corrected to note that the second building was the Lonsdale Masonic temple, home of Duke of Connaught Lodge 64.)
42-year-old Vancouver man is in police custody tonight suspected of arson after fires were set at three different suburban Masonic halls around the city. Police have released few details about the suspect or his motive, but did say he has a "history of interactions with the police and no history of arson." The targeted lodges were Lynn Valley Lodge 122, Lonsdale Masonic Temple, home of Duke of Connaught Lodge 64, and Park Masonic Hall, home of Heritage Lodge 23.
Thankfully, no one was injured in any of the three fires. 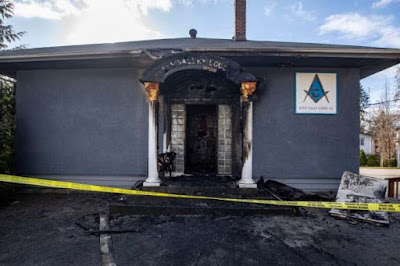 North Vancouver RCMP responded to the first fire at the Lynn Valley lodge just before 6:45 a.m. when a neighbor saw the flames. The 97-year-old temple suffered much smoke and water damage, but wasn't completely destroyed.
Less than 15 minutes later, a second fire was reported a few miles away at the 110-year-old Lonsdale Masonic Temple. By the time the flames were extinguished hours later, that historic Masonic hall and the businesses that rented its ground floor were a total loss.
While firefighters were responding to the first two blazes, a third report came at about 7:25 that the Park Masonic Hall had also just been torched. A third set of firefighters was dispatched to try to contain that blaze, and compared to the first two, the Park temple was the least damaged. While firefighters quickly put out the fire, lodge members say the stench of gasoline is everywhere throughout the building. The arsonist spread fuel throughout the two floors and in the lodge room itself.
The suspect who was arrested was spotted leaving the building carrying a "jerry can" by an off-duty police officer who confronted him. As he attempted to take the suspect into custody, the man fought back, knocked the officer down, and managed to get away in his minivan. A bystander spotted the initial flames and was recording just as the fire started. That recording caught the attempted arrest, struggle and escape on video.  Armed with his description, police spotted the suspect again and arrested him at about 10 a.m. That video can be seen on the Global News website HERE.
So far, the most complete story is being syndicated from the CBC website HERE.
Canadian authorities cannot release the name of the suspect until he is formally charged with a crime. Meanwhile, Vancouver police have stationed officers at all Masonic halls in and around the city.
Posted by Christopher Hodapp at Tuesday, March 30, 2021