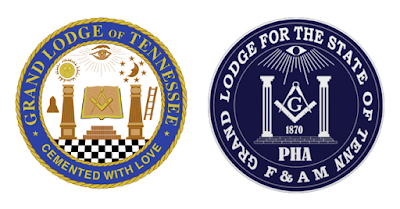 by Christopher Hodapp
THIS STORY HAS BEEN UPDATED 3/25/2021, 10:50 AM:
Late this afternoon, Facebook lit up with the news that the assembled members of the Grand Lodge of Tennessee have just voted to extend recognition to the Most Worshipful Prince Hall Grand Lodge of Tennessee at their annual communication in Lebanon, Tennessee.
The MWPHGL of Tennessee already voted at their 2019 annual communication to seek joint recognition with the GL of Tennessee and to accept it should it be offered, with no further vote required. For the purposes of their constitutional requirements, the GL of Tennessee brought the Prince Hall GL's request to the floor two years ago and it had to lay over for a year (which they apparently do with all recognition requests). Because of the COVID shutdowns in 2020, they were unable to adopt final passage of the legislation until this week.
Upon adoption of the resolution, MW L. Lamont Banks, Grand Master of the MWPHGL of Tennessee, issued an email to his members, saying, "I am happy to report that peace and harmony prevail in the Jurisdiction of Tennessee. We now have mutual recognition!"
With this announcement, the map shrinks to just six remaining states in which joint recognition has not yet been achieved: Arkansas, Georgia, Louisiana, Mississippi, South Carolina, and West Virginia. 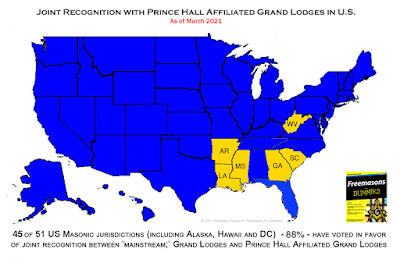 Early information is that the two Tennessee grand lodges have adopted joint recognition of each other, but without visitation immediately. Before the high-decibel shouting of "What's the point of that?!" begins, it should be noted that recognition without visitation has been a common preliminary step taken in recent years in other states – it's not unusual. Initial baby steps have been pretty common in states like Texas, Alabama, Florida and elsewhere in the last decade. Essentially, the goal is a transition period during which members in both jurisdictions have time to get used to the idea of sharing Masonic territory in their state, while respecting each other's sovereignty over their own members and lodges.  The transition period is used to formalize visitation rules, examine each others' work, work out questions of honoring transfers or demits, and iron out other details between two grand lodges sharing the same jurisdiction.
Something most U.S. Masons don't fully comprehend is that, technically, the mainstream GL and the PH GL in any given state both consider each other in the same way they consider a regular but 'foreign' jurisdiction. In the world of Masonic relations and jurisprudence, any visit between Masons in foreign jurisdictions is supposed to go through their respective Grand Secretaries and Grand Masters.

Impatient brethren should bear in mind how long it took just to get to this point in the first place, and simply be supportive and encouraging of their grand officers for the eventual lifting of restrictions. It will come.
Congratulations to brethren from both grand lodges for coming to this decision.
Posted by Christopher Hodapp at Wednesday, March 24, 2021