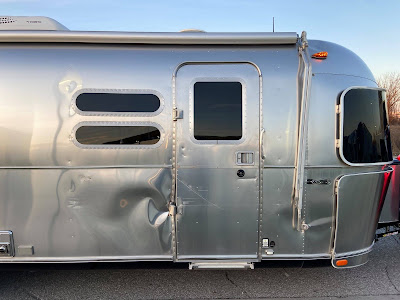 by Christopher Hodapp
Oh, Fie! accursed, cruel and foul 2020, most abominable and scurvy of all years!
Folks probably assumed we'd be rolling into California long about now after leaving over a week ago and spending 10 days on the road. You would, of course, be correct in a normal year. But no.
When we left Indianapolis last week and headed West on the Gomorrah Highway, we had barely made it beyond our own county line when we were trapped on an exit ramp in a construction zone traffic jam. Surrounded by semis on one side and concrete barriers on the other with no room to spare, I foolishly attempted to inch my way past a truck. In doing so, I managed to slice open about 6 feet of aluminum on the Airstream, wrenching off the awning support, the bottom door hinge and twisting one of the vertical struts enough to shove the interior cabinets off the walls.
As bad as it was, it didn't hurt half as much as being forced to endure a fusillade of "I told you sos" ever since.
We immediately turned around that night and headed eastward instead to the Airstream factory in Ohio, figuring their service center was better equipped than anyone to do an insurance estimate and patch us together enough to continue our trip. Turns out the damage comes to more money than the cost of the first five cars I ever owned, combined.
Between my own hillbilly engineering, Airstream's expertise and a roll of Flex-Seal tape, we managed to come up with enough jury-rigs to last until February when they can get us into the body shop. By Saturday we were back on the road west again, but had to stop in Illinois long enough to submit new book chapters to our publisher to meet a firm deadline.
(We're actually writing about RVs, and as I explained to our editor, I decided to wreck our own trailer as research for the 'How To Drive Your RV' and 'Insurance' chapters of our new book. THAT'S how dedicated I am to this project...) 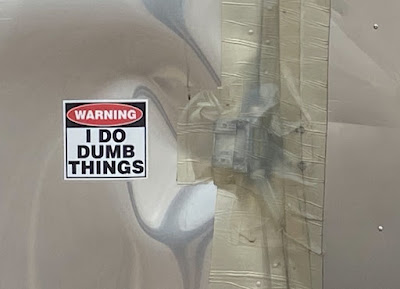 By Tuesday night, we were confident that our delays were all finally over with nothing but smooth sailing ahead of us. I'm sure Captain Smith thought the same thing when he casually inquired if anybody had noticed any icebergs lurking about.  We got as far as west St. Louis, unhitched the rig, set up camp, fired up the furnace, and all was right with the world. Until Alice took a wrong step climbing into the trailer. 'SNAP' went something in her non-replacement 'good' knee, which apparently felt like somebody shot her in the leg with a .44 magnum and left her unable to sit, stand, walk, lie down, or manage any other inventive position without shrieking in agony.
Which is why after spending ten days on the road, we're right back home in our own driveway where we started. A truly worthless orthopedist this morning looked over an x-ray and charged us beaucoup sheckels to say he couldn't really tell what had snapped, didn't bother to order an MRI, and opined that 'some patients' DO get over this without surgery, whatever the hell THIS is. Clearly the class anchor who majored in Ace bandage wrapping. Thankfully our primary care savior and longtime friend Suzi was able to see Alice late this evening and got her lined up with an MRI Saturday. Her guess is that it may be a torn ACL.
We ought to travel with our own Greek chorus just so we don't get blindsided when in need of a good dithyramb or two.
So, I'm offloading all of our lares and penates since it looks like we'll be celebrating Christmas in true COVID-year isolation style after all. What the hell - there's only three weeks left in 2020. I predict the house will get hit by an asteroid at 11:59PM on New Years' Eve just so it can squeak in under the wire as a last-second farewell to this annus horribilis.
Posted by Christopher Hodapp at Friday, December 11, 2020