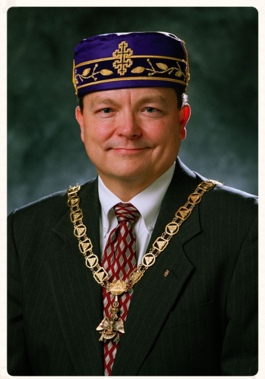 Grand Commander Cole was just elected today at the AASR-SJ Biennial Session being held at the Capital Hilton Hotel in Washington, DC. He now takes on the position from retiring, now-Past Grand Commander Illus. Ronald A, Seale, 33°, who served in this position for 16 years, since October of 2003.

GC Cole served as Grand Master of the Grand Lodge of Virginia in 2001. For many years he has been the CEO for the Masonic Home of Virginia in Richmond. Formerly controller of the Virginia Tech Foundation, he held several administrative positions at Virginia Tech following his tenure with an international accounting firm. His 30 years of experience with nonprofits and businesses includes roles as auditor, founder, officer and director of numerous organizations. He is also a licensed life insurance agent and holds two degrees from Virginia Tech.

Prior to this most recent honor and position, he was serving as both the Lieutenant Grand Commander of the Supreme Council and as the Sovereign Grand Inspector General in Virginia. Illus. Brother Cole's Masonic career appears on the Portsmouth Valley Scottish Rite's website:

Brother Cole was raised a Master Mason in 1983, in Craighill Lodge No. 160, serving as its Worshipful Master in 1987. His past Masonic service includes serving as District Deputy Grand Master, District Educational Officer and as Chairman of the Grand Lodge Committee on Finance.

Brother Cole is a member of the Valley of Roanoke, Ancient and Accepted Scottish Rite and was coroneted 33° Inspector General Honorary in October, 2001. He is a member of Blacksburg Royal Arch Chapter No. 65, Blacksburg Commandery No. 32, the Fort Lee-Richmond Camp No. 72 of the National Sojourners, Kazim Temple, A.A.O.N.M.S., Saint Thomas Conclave, Knights of the Red Cross, Wilderness Road York Rite College, and a 9th Grade member of the Masonic Societas Rosicruciana. He has been elected to honorary membership in several Virginia lodges. His current roles include: Grand Representative to the Grand Lodge of North Carolina; the board of directors of the Scottish Rite Research Society; the Code Commission for the Grand Lodge of Virginia; the Virginia Rainbow for Girls Scholarship Committee; the advisory board of the Virginia DeMolay Foundation and as a charter advisor for the Hanging Rock Chapter of DeMolay.

He has received high honors from each of the Masonic Youth organizations, including an Honorary Membership on the International Council of DeMolay and its Legion of Honor award; the Grand Cross of Color from the Rainbow for Girls and Honorary Membership on the Job’s Daughters Grand Guardian Council of Virginia. On April 1, 2003, he received the Pierpont Edwards medal from the Grand Lodge of Connecticut for outstanding Masonic Service. On November 5, 2004, he received the George Washington Distinguished Service Award from the Grand Lodge of Virginia. In 2006, he was commissioned an honorary Kentucky Colonel by the Governor of Kentucky. On November 10, 2006, he received the Odie R. Howell Leadership Award from the Virginia DeMolay Foundation.

Illustrious Brother Cole was born in Asheville, North Carolina, on March 3, 1958 and moved with his parents to Shawsville, Virginia, in 1969, where he and his wife, Mary Ann, now reside.

They have a daughter and a son. Professionally, he is a CPA, having worked in public accounting and later in various administrative positions at Virginia Tech for almost twenty years. He holds both a Bachelor’s and a Masters degree from Virginia Tech. He is currently employed as the Chief Executive Officer for the Masonic Home of Virginia.

Brother Cole has been active in community and church service, including service as an Adult Bible Class teacher and as an active lay speaker since age fifteen. Professionally, he has served as a consultant and advisor to numerous companies, universities and non-profit organizations throughout the country. He regularly conducts workshops for Masonic and other charities and is a frequent speaker at professional conferences around the country. In his spare time he enjoys golf.