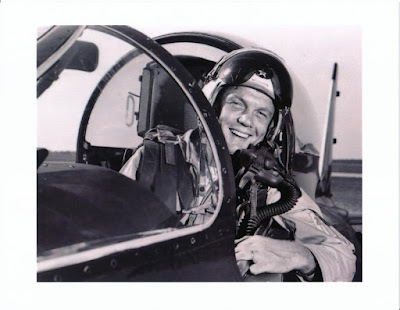 As reported late in the week, former astronaut John H. Glenn, Jr. passed away Thursday at the age of 95. His career as a Navy and Marine aviator, test pilot, space explorer, and politician was widely reported on upon his death. Less reported was his distinguished and courageous career before his journeying into space as a fighter pilot in two wars, and being awarded the Distinguished Flying Cross an astonishing six times. 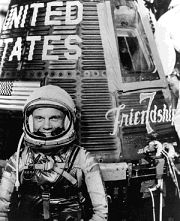 In April of 1959, Glenn was officially announced as one of the "Mercury 7," the seven astronauts who would be the beginning of NASA's manned spaceflight program that would land Americans on the Moon in just 10 years.  Of those seven, he was the oldest - nearly 40 - which was the cutoff for the selection program. Ultimately, his would be the third mission, and the breakthrough one that would do more than just send a man in a capsule up into the edges of space briefly and land him again.

Those days and space missions all through the 1960s united the people of the Earth in ways that nothing else would again (at least until the televised horror of 9/11), as these incredible men risked their lives. While the Soviet space program beat NASA in several early milestones of unmanned, then manned, spaceflight, the difference was that the U.S. space program openly aired on live TV. The Russians only publicized theirs after their successes had been assured. Failures and deaths of their cosmonauts were hidden for years in some cases. But all over our country, TVs were rolled into school rooms and we watched every launch and every recovery.

Glenn's February 20th, 1962 Mercury mission aboard the tiny Friendship 7 capsule captivated the entire world, as he orbited the Earth - the first American to do so. But because potential damage to his craft's heat shield was feared just after launch, Glenn's orbital mission was cut short from seven planned orbits down to just three. An already perilous mission became what many on the ground feared was his death trap, as the capsule fell into radio silence during reentry. Tens of millions of viewers around the world broke into cheers when Friendship's parachute appeared on live television as he splashed down safely.

Every single manned US mission always ended with the very same nail-biting sequence - that terrifying radio silence as we all held our breath every time before the recovery ship's camera picked out the orange and white chute in the distant sky - a blur on our black and white TVs. Even then, there was no assurance that the man inside had survived reentry until the capsule's hatch was opened by a team of Navy divers and the astronaut actually crawled out into daylight. 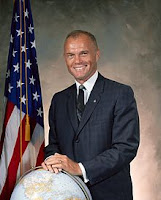 Not long after his historic mission, John Glenn retired from the Marine Corps and entered politics in 1970, serving four consecutive terms in the Senate, and even a failed foray into the presidential nomination arena in 1984.

But in addition to the numerous accomplishments and milestones in John Glenn's life, little talked about were his Masonic associations. Of those pioneering seven Mercury pilots, Gus Grissom, Gordon Cooper, Wally Schirra, and Glenn were all Freemasons, or became one after their flights.

In 1964, two years after his orbital flight, he petitioned Concord Lodge No. 688, in his home town of New Concord, Ohio. (That lodge later merged with Malta No. 118 in Norwich, Ohio.) He was elected, but never went through the degrees at that time because of his demanding schedule. But he continued to remain in contact and express his desire for the degrees. He finally received all of his Masonic degrees in full in a "Mason at Sight" ceremony conducted by Jerry C. Rasor, Grand Master of Ohio, in 1978, some fourteen years after originally petitioning. The only area venue large enough to accommodate the hundreds of Masons who attended was the high school gymnasium in Chillicothe. 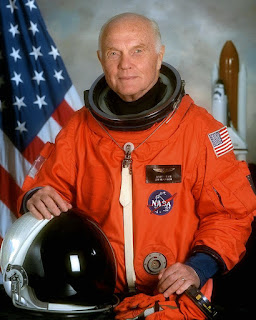 In 1998, Bro. Glenn became a 32° Scottish Rite Mason in the Valley of Cincinnati (NMJ). The following year, he was coroneted a 33rd degree Scottish Rite Mason. And when he returned to space once again later that year in yet another history-making flight aboard the space shuttle Discovery at the age of 77 as a mission payload specialist, he wore his gold 33° ring.

While orbiting the globe again aboard that mission, 36 years after his first, Glenn remarked as he gazed at the Earth from thousands of miles above, “To look out at this kind of creation and not believe in God is to me impossible. It just strengthens my faith.” It has been a sentiment shared by scores of astronauts for half a century.

In 2007, Glenn was again honored by the Scottish Rite (NMJ) when he was awarded the Gourgas Medal, their highest honor granted for "notably distinguished service in the cause of Freemasonry, country, or humanity."

Illus. Bro. Glenn was - and remains - the oldest human to venture into space.

The day of Glenn's first mission into space in 1962, his friend and fellow astronaut Scott Carpenter looked on as the engine of the new Atlas rocket thundered over Cape Canaveral, carrying the Friendship 7 into orbit. Carpenter was the mission's backup pilot, and he himself had not yet made his own flight. (He would go up three short months later, aboard Aurora 7.) So, he was acting as NASA's official voice from the ground to relay messages to Glenn that day in February - the "CAPCOM" we would always hear during live broadcasts. As he watched the rocket rise, he keyed his own microphone and famously wished his friend "Godspeed, John Glenn."