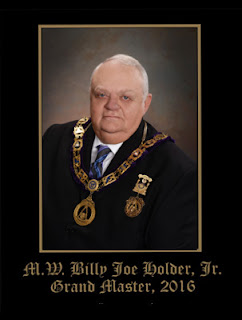 This is particularly unfortunate as Carr has been widely regarded by many to be a very forward thinking Mason.

I have also received a message that Arkansas Past Grand Master Jarrod Adkisson has been suspended, as well.

The suspensions also affect these Masons' positions in the leadership of the statewide York Rite and Scottish Rite.

The overwhelming consensus among men who have contacted me today has been that the charges are fabricated. Sadly, some Masonic trials - specifically commissions called by GMs, and not individual lodges - are often dangerous situations to step into, and the charged brethren are frequently denied virtually all rights solely on the whim of a GM and his hand picked commission members. In the hands of some GMs, these types of trials can become kangaroo courts, with the accused denied the most basic rights of proper representation or defense. While Masons are uniformly allowed to have legal counsel who are versed in Masonic law at these commissions, it is not uncommon for the accused to be told that their counsel may not speak during the trial. I hope for the sake of these brethren that this is not the case in Arkansas.

It is my understanding that GMs in Arkansas are empowered by their Constitution to not only suspend, but to expel Masons in these cases. Most states do not permit this, but I have been told that past attempts to change the law in Arkansas have been met with the all too common response that the proposal is "not in proper form" or out of order.

Any Arkansas Masons who wish to correct this story may contact me in confidence via email.

Email ThisBlogThis!Share to TwitterShare to FacebookShare to Pinterest
Labels: Arkansas