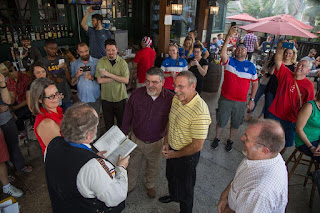 I had the distinct honor to speak at the Conference of Grand Masters of North America yesterday in Madison, Wisconsin. It was a great opportunity to connect with so many grand line officers and friends old and new from around the country and the world, and especially to reconnect with those I have met over the years when visiting their own jurisdictions.

Today while changing planes, I received a Google alert in my email box pointing me to a story that appeared this morning on the website of the local Memphis, Tennessee NPR station, WKNO about the recent expulsion of two gay Brethren in that town from the fraternity. (For the earlier background on the story, see the link here.) I am quoted briefly in the story, and I agreed to speak with them last week before I left for Madison.

I spoke to the assembled Grand Masters during their business session, and in my remarks, I said the following:

Just 10 years ago, no one would have even contemplated the Masonic complications of gay marriage, and suddenly, seemingly overnight, it’s the law of the land, and new, young Masons are shocked when they discover a few jurisdictions have rules discriminating against gay members. Our entire society has changed just that fast, in the blink of an eye, and we have to deal with it. Because if we are counting on these new men to join, become active, and save our fraternity from oblivion, we can’t just dismiss the issues THEY find to be vitally important as being trivial, or even worse, none of their business.  We tell them, often right there on our webpages,  that we teach tolerance. We can’t go back on that promise.

We can no longer hide episodes we may find embarrassing anymore. No matter how tempting it might be, we cannot stop online discussions of our actions. Social media is too important in everyone’s life now. If something happens in just one isolated lodge or grand lodge, or even in a clandestine lodge, such as the recent arrest of several men masquerading as a Masonic police force in California, literally the rest of the world sees the story online or even on their phones the very next day, and brands the entire fraternity with it. That’s the dark side of the age in which we live now.

I have already said my peace on this story in previous entries. It is not my intention to question the authority of any sovereign Masonic jurisdiction to make rules that suit their members. But several Grand Masters of American grand lodges spoke with me privately at the Conference and told me that already, because of the actions of the Grand Lodges of Tennessee and Georgia, their own members have been publicly protested against, and even dis-invited from public events like cornerstone ceremonies. And I can tell all of you, there are mutterings among some grand lodge bodies about seriously considering recognition issues.  You can tell us Yankees - as several emails have referred to me tonight - to butt out of your state's business. But this issue goes beyond your own borders, and just like the racial issues in Georgia that arose several years ago hitting the New York Times, it will only get bigger.

That affects all of us.

I strongly urge the Brethren in Tennessee and Georgia to consider carefully how you proceed from here. What happens in Memphis or Atlanta puts all Freemasons, worldwide, in the spotlight.   Fortunately, Brethren in Kentucky back in 2010 voted against proposed legislation in their Grand Lodge that would have banned gay members.  At least in Tennessee next month, Masons have the opportunity to remove the existing discriminatory wording from their code. Unfortunately, the situation in Georgia can't be righted so quickly.

Petitioners who are investigated, voted on, initiated, passed, and raised in a local lodge are just and upright Masons. No one stops you from refusing to sit in your lodge with a visitor you find objectionable, if that is your choice. But I continue to say that the sexual orientation of a Brother is none of our business, and I guarantee you have long been sitting in lodge next to gay Masons, probably since the night of your initiation.

Each individual Mason has his own, private religious beliefs, and we all vary from one another in some way or interpretation - some more than others. That's why the very design of our fraternity is  such a perfect blueprint for bringing together men in a world full of different faiths and political beliefs. But we cross a very dangerous line when we actually write our personal religious and political views into our Grand Lodge regulation books.

I simply caution that the rest of the Masonic world is carefully watching what you do with deep concern.

UPDATE: I received word on February 28th that the annual meeting of the Grand Lodge of Mississippi in March will consider a resolution to change their petition. The initiative will add the question "are you a natural born heterosexual man".

Sadly, it seems that this issue will continue to come up among us.