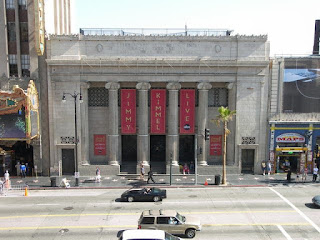 Alice and I lived in the Studio City area of the San Fernando Valley back when we were in film school, between 1978 and 1983, as part of my 5 colleges in 7 years education plan. Unfortunately, I didn't have any knowledge of Freemasonry in those days, so I didn't have the slightest idea of what to look for in Masonic architecture. That's a shame, because some of the more magnificent Masonic lodges in the Los Angeles area were still owned by the fraternity back then, before the dramatic plummet in membership we suffered in the 90s and on past the turn of the new century. Nevertheless, most of them avoided the wrecking ball and have become new venues, while the fraternity moved on to newer, less costly digs.

I came across an article from 2014 on the Curbed LA website,  7 of LA's Most Magnificent Examples of Masonic Architecture by Pauline O'Connor, that points out seven of the more notable Masonic structures in the Los Angeles area. So if you are ever in the region with some time to kill (and you'll need it - traffic hasn't improved since I lived there), go and visit these beautiful locations.  One update from the article is that the unique Masonic Temple in North Hollywood was unfortunately sold last year, but will be developed.

By the way - notably missing from the article is the  Glendale Masonic Temple (left), which is currently being remodeled for commercial use.  Visit Glendale Lodge No. 368 here.

Down the road a bit is Burbank Lodge, where I had the distinct pleasure of speaking last year.  I heartily encourage you to visit them as well. See their website here. 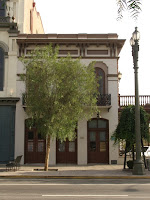 And much smaller and older is the original home of Los Angeles Lodge No. 42, which was chartered in 1853, and was the first lodge in LA, as well as the second oldest in Southern California. Their original building  can be seen in the historic area known as El Pueblo de Los Angeles (right). They now meet across town in the Santa Monica Masonic Center.
Posted by Christopher Hodapp at Saturday, February 06, 2016