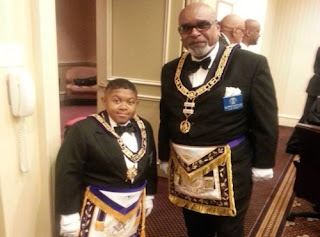 I'm a little late in discovering this, even though many Prince Hall Masons already knew it for quite a while, but Illustrious Brother Emmanuel Lewis 33°, child star from the TV show "Webster" that was aired between 1983-1987, is a Prince Hall Scottish Rite Mason.  He is a member of W.C. Thomas Lodge No. 112 PHA in Atlanta, Georgia. He is also a Past Commander-In-Chief of Atlanta Consistory No. 24A (2013-2014), and reportedly very active in the Phylaxis Society, the Prince Hall Masonry research society.

He was born in 1971 in Brooklyn, New York, and is the youngest son of Margaret Lewis, a former computer science professional. He was nominated four times for the Young Artists Awards, and interestingly, in Japan, he is best known as a singer, and his song, "City Connection," rose to No. 2 on the Japanese Oricon Music Charts.
Posted by Christopher Hodapp at Sunday, December 13, 2015