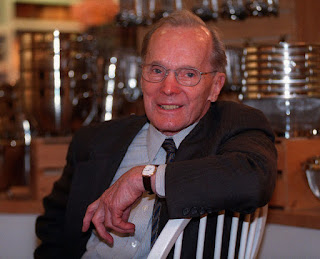 Our Brother Charles "Chuck" Williams, founder of the Williams-Sonoma culinary store chain, passed to the Celestial Lodge Above on Saturday, December 5th, 2015 in San Francisco. He was 100 years old, and died of natural causes. He has no survivors.

He was a member of Temple Lodge No. 14 in Sonoma, California. His column is broken, and his Brethren mourn.

From an article about him in the December/January 2009 California Freemason Magazine:


Like many men of his generation, Williams’ father was a Mason, and he followed his father into the craft.“Back in Jacksonville, Florida, where I grew up, my father was a Shriner and my mother was in Eastern Star. I really grew up with Masonry all around me,”Williams relays.“I remember when I was 10 years old, my father took me along for the ride to a Masonic event, and he really knew so much about it.”

At 38 years of age, Williams became a brother of Temple Lodge no. 14 in Sonoma.“I remember the day: november 14, 1953. i received a letter from the master – which I still have – and I got my third degree at a ceremony at the lodge,” he says.“An electrician from Sweden was one of my friends and he was very involved as a Mason, so we were in the lodge together.” That same brother from Sweden hosted Williams on his fateful first trip to Europe, which ignited his love for French cookery.

Williams opened his first store less than two years later, and by 1958 had moved his home and business to San Francisco. That same year, just blocks away in the same city, the California Masonic Memorial Temple was dedicated as the new home of the Grand lodge of California. For both Williams and Grand lodge, the year 2008 marked a 50th anniversary milestone.

Born Oct. 2, 1915, Williams came by his love of cooking by baking with his grandmother in her Jacksonville, Florida, kitchen. The Great Depression took the family to Southern California, to which Williams returned after serving as a mechanic with the Army during World War II. A golf trip with friends introduced him to Sonoma, and, enamored with the then-sleepy town, Williams relocated there in 1947.

Inspired by a fateful trip to Paris with fellow food enthusiasts, Williams purchased the Sonoma Hardware store in 1956 and began offering Americans the kind of high-quality cookware and culinary tools he'd admired in France. The store proved an instant success, and in 1958 Williams-Sonoma relocated to San Francisco. With the publication of Julia Childs' classic "Mastering the Art of French Cooking," America's taste for haute cuisine exploded, and Williams-Sonoma's fortunes rose, with another major expansion of the San Francisco store and a flourishing catalog business.

Williams sold the company in 1979, but he remained closely involved in many crucial facets of the business up until his death, such as his authorship of many titles in the company's noted cookbook line.

"He worked on over 50 titles that have sold over 100 million copies worldwide," said Patrick Connolly, executive vice president of Williams-Sonoma, to the San Franciso Chronicle.

Lauded with numerous awards over his career, including spots in the Halls of Fame for both the Culinary Institute of America and the Direct Marketing Association and a lifetime achievement award from the James Beard Foundation, Williams is lauded by many for helping to revolutionize and diversify American cooking.

"With his impeccable taste and unique talent for selecting the right products at the right time, he built a powerful brand that inspired a cultural revolution around food and had immeasurable impact on home and family life around the world," said Janet Hayes, Williams-Sonoma brand president.