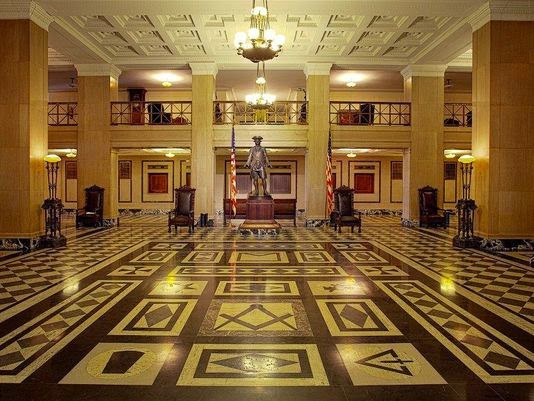 The Masons in St. Louis are offering their magnificent downtown temple, known as the New Masonic temple,  for sale for a paltry $6 million.Very sad to lose this incredible place. We just keep selling off our own heritage.  From KSDK.com:
ST. LOUIS - The historic Masonic Temple on Lindell Boulevard is up for sale.
The Masonic Temple Association of St. Louis has put the 386,000-square-foot building on the market for $6 million.
The temple itself has seen its brushes with history and history-making persons. It houses the former officer of then-Senator and Free Mason Grand Master Harry Truman, prior to his becoming President of the United States. And before flying solo to Paris aboard the Spirit of St. Louis, Charles Lindbergh was initiated as mason at the temple. Actor Ernest Borgnine, a mason, not only attended meetings there, but also filmed a scene on the temple steps for the 1980 film Escape from New York.
Architectural firm Eames and Young designed the temple, with consulting architect Albert Groves. Groundbreaking for the temple took place in 1923, with the dedication and opening happening in 1926. It would be Thomas Young's last major project before retiring in 1927; William Eames died in 1915.
The Masonic Temple was constructed in three receding stages, symbolic of the three steps in masonry. The building features 14 levels: six full floor and eight mezzanine levels.
The 185-foot tall temple showcases Greek Ionic style architecture on the exterior, with various styles inside, and massive triple bronze front doors.
The main lobby was built using Bedford limestone with gray limestone trim and marble finishing. The lobby also has a 38-foot mural titled "The Origins of Freemasonry," created by noted African-American artist Jessie Housley Holliman in 1941 and dedicated by Truman. It is the only surviving Holliman mural located in a local public building.
Posted by Christopher Hodapp at Friday, December 12, 2014