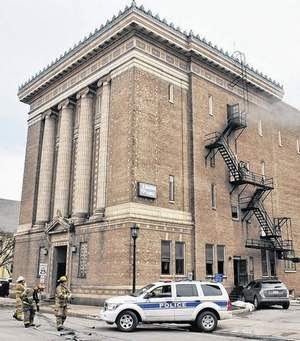 The Masonic Temple in Wilkes-Barre. Pennsylvania caught fire on Tuesday, causing major damage to the historic building. Fire officials have not yet determined the cause.
From the Times Leader by Jerry Lynott:
A fire Tuesday afternoon damaged the Masonic Temple on North Franklin Street.
The cause is under investigation and a fire inspector was on scene around 2 p.m., roughly an hour after the alarm came in, said Wilkes-Barre Fire Chief Jay Delaney.
“It’s very preliminary. The fire started about an hour ago. We just got it under control,” Delaney said as smoke still wafted from the four-story brick building.
“We’re still having a tough time getting all the residual heat and smoke out of the building,” he said.
“It’s like a maze inside there with multiple, multiple rooms in there,” Delaney said. “A lot of the smoke and heat got trapped inside of the building, that’s why it took a long time to extinguish. But it’s under control. The fire’s out. We’re just mopping up right now.”
Three Masonic Lodges use the building, but it was unoccupied at the time of the fire. A meeting was scheduled for Tuesday night.
Delaney said there was power to the building and firefighters arrived to find heavy fire on the first floor. Black smoke billowed from the front door and windows.
Firefighters broke some windows, but overall they fought the fire in a manner to protect the historical value of the building. “We really tried to limit the damage to the building,” Delaney said.
Police closed North Franklin street between West Union and West Market streets during the fire. A steady stream of people walked by and some stopped to take photos.
A member of one of the lodges, who did not want to give his name, said the building is insured. He said there is a lobby on the first floor. Along the sides are five rooms and restrooms. A kitchen is located in the rear. There are meeting rooms on the second and third floors. The fourth floor is vacant.
“The building is so big we still had to do a search of the entire building, every single room of the building to make sure there was no one in there,” Delaney said.
Written by Christopher Hodapp at 4/02/2014