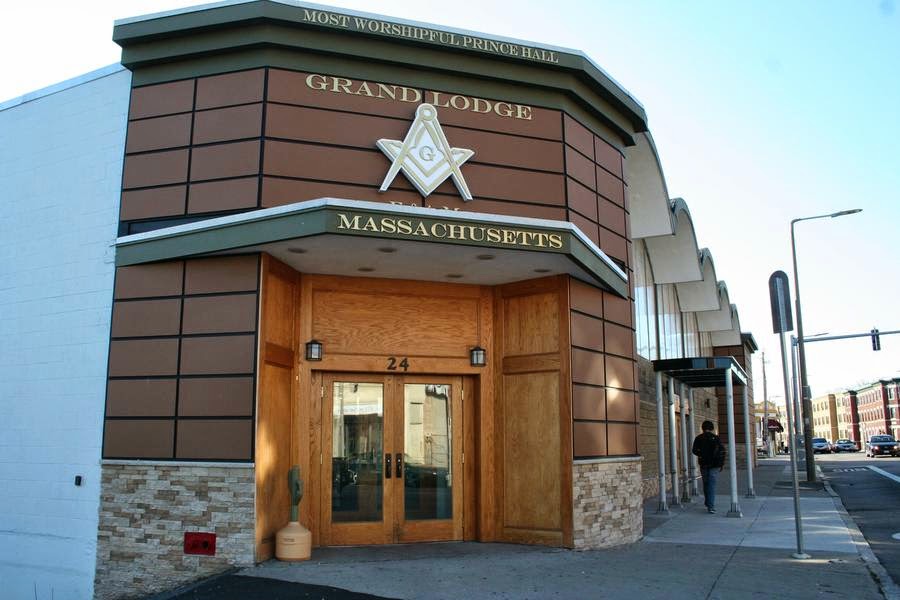 A foreclosure auction has been scheduled for the Prince Hall Grand Lodge building in Dorchester, Massachusetts on Thursday, April 17, according to a legal notice
From the Boston Business Journal:

The 30,000-square-foot building is located on about one acre at 18-24 Washington St. The auction will be held on siteThe nonprofit organization took out a $300,000 mortgage in 2006 from Sovereign Bank, now Santander Bank. The note was recently sold to Northborough Capital Partners when the group failed to make payments.Shectman Halperin Savage LLP, the law firm representing the lender,and Lodge officials did not return calls seeking comment.On its website, the Prince Hall Grand Masonic Lodge calls itself the oldest black fraternal organization in North America.

A letter has been sent out to Prince Hall members, but it seems like awfully short notice. It reads as follows:

May this email find you and yours in good health and spirit. As you may or may not know, the Most Worshipful Prince Hall Grand Lodge, Jurisdiction of Massachusetts is currently dealing with a serious crisis. Our Masonic Temple and adjacent land, located at 24 Washington Street Dorchester, Massachusetts is scheduled to be auctioned on April 17, 2014.

Like several other area organizations and churches we are not exempt from the negative effects of a bad economy. In our case and due largely to the actions of our past mortgage holder (Sovereign Bank), we are currently faced with foreclosure on our beloved Grand Lodge Temple.

In order to resolve this terrible crisis, your help in the way of monetary donations and prayers is necessary. If you would like to help the Most Worshipful Prince Hall Grand Lodge, Jurisdiction of Massachusetts (Where Prince Hall Freemasonry Worldwide Began) in this hour of great need with a tax-deductible donation, please click on the link. "

Please donate whatever you can and please don't be modest. No donation is too big or small. Every act of generosity is needed and appreciated. Just click on the above link and make your donation using your PayPal account, credit or debit card.

Whether you are able to make a donation or not, please forward this plea to everyone you know. We can make it through these hard times with your help and generous donation.

If you prefer to use a check or money order, please make it payable to; The Prince Hall Foundation, Inc. and put "Building Relief Fund" in the memo section and send it to:
Prince Hall Grand Lodge
24 Washington Street
P.O. Box 227
Boston, MA 02121

No act of kindness however large or small will go unrecognized. Thank you in advance for your generosity and support.

The auction was avoided at the last minute, in part thanks to donations. From the Bay State Banner  on April 16th:


A foreclosure auction for the Prince Hall Grand Masonic Lodge in Grove Hall scheduled for Thursday was called off last week after officials from the lodged reached an agreement with Northborough Capital Partners, the entity that currently holds their loan.
Under the terms of the agreement, the Prince Hall officials paid more than $30,000 in penalties and interest for defaulting on a $300,000 loan, according to a lodge member who spoke on the condition of anonymity. The lodge has six months to pay off the remaining principal on the loan.
Lodge officials would not speak to the Banner for this story.
The Lodge borrowed the $300,000 in 2006, to make needed repairs to the 30,000-square-foot building, including repairs to the roof and HVAC system.
According to the Banner’s unnamed source, rank-and-file members of the lodge were unaware of the default on the loan until a foreclosure auction notice garnered media attention.
Once lodge members became aware of the predicament, they began making donations.
“They’ve got members on fixed incomes coming up with $500 and $1,000 donations,” the source said.
Coming up with the funds to pay the remaining principal on the $300,000 loan shouldn’t be a problem, according to the source.
“There are a number of institutions that are now offering to step up and help save and restore the space,” he said. “This is do-able and should have been done a while back.”
The notice of the impending auction sent shock waves through Boston’s black community. The Prince Hall Lodge has been the site of numerous community events, including concerts, community meetings and political rallies. Sitting on an acre of land, it is one of the largest black-owned parcels of commercial real estate in the city.
Posted by Christopher Hodapp at Wednesday, April 09, 2014