The Lost Symbol and Mount Vernon? 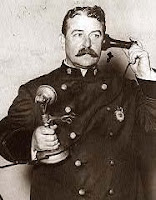 I spoke with a very nice spokeswoman at Mount Vernon today. She informed me, after fielding several other calls about the article in The Scotsman about Dan Brown's The Lost Symbol, that their security department wasn't aware of anything like this until today's article, and they were planning nothing special to keep Dan Brown fans from busting into George's burial vault. Of course, perhaps I'm reading Bob Cooper's quote incorrectly. Perhaps he means in the novel Mount Vernon's staff is afraid of the Rosslyn Chapel effect hitting George Washington's home.
(Or perhaps security wouldn't be secure if you told every Dummy™ claiming to be a writer what your secure security plans were.)
I, of course, know the real secret of Rosslyn Chapel and Washington DC. I know where it is, and I know what treasure lies beneath it. And it's hiding in plain sight...
Posted by Christopher Hodapp at Friday, August 07, 2009