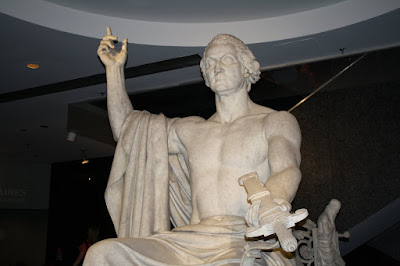 Thomas Jefferson referred to the men who drafted the Constitution as an “assembly of demigods,” so it was hardly a surprise when Congress decided to immortalize George Washington in a similarly magisterial fashion. Greek symbolism was much admired and sought after in the Federal City, and so it seemed like a scathingly good idea at the time to immortalize the President in suitably mythical fashion.

In 1832, the sculptor Horatio Greenough was commissioned by Congress to create the ultimate statue of Washington. It was to be placed in the rotunda of the capitol, underneath the Constantino Brumidi fresco in the dome’s ceiling ("Apotheosis of Washington") which depicted the president ascending among the clouds into heaven, surrounded by thirteen angelic spirits. Enthusiastic fans encouraged Greenough to create what they believed would be the ultimate image of the hero of the Revolution and Father of the Country, with just the proper amount of veneration.

What they got eight years later was a representation of George, sitting, with his lower extremities wrapped in a toga, and his torso naked as a proverbial jaybird. Greenough patterned the image after a classical statue of the Greek god Zeus at Olympia, one of the Seven Wonders of the Ancient World. The statue was installed in the rotunda in 1842, where it was almost immediately greeted with hoots of derision. Few had ever really thought of George Washington being naked before. In fact, Nathanial Hawthorne summed up the public sentiment when he said, “I imagine he was born with his clothes on, and his hair powdered, and made a stately bow on his first appearance in the world.” Others put it more bluntly, saying it looked like the President president was emerging from a long soak in a bathtub and reaching for a towel.

Equally distressing was that, while it was not quite as big as the original 40-foot statue original of Zeus carved by Phidias in 456 BC, from which it was copied, it sure weighed like it, tipping the scales at more than twenty tons. After a year of sitting in its designated location, it was determined to be too heavy and dangerous to the floor over the underground crypt that had originally been designed for Washington’s body, so the big, expensive embarrassment was moved to a little-seen area outside. 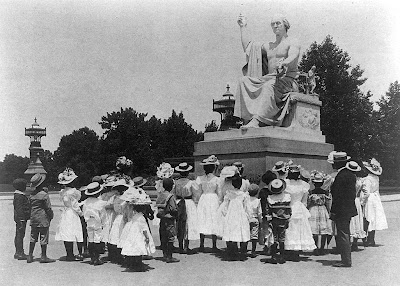 When the weather finally began to damage the carving, it was hauled off to the Smithsonian in 1908, and installed in the National Museum of American History in 1964, where it can now be seen giving his solemn Olympian blessing to the second floor escalators. 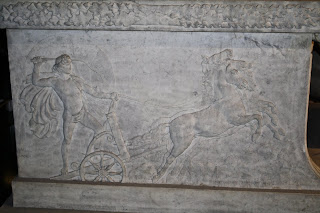 Washington sits on a throne, its panels containing the image of Helios, one of Zeus’ innumerable sons, carrying the sun across the sky on a horse-drawn chariot. It harkens back to Ben Franklin’s remarks concerning the heroic figure of Washington as he sat in a chair during the Continental Congress. The image of the sun was carved on the back of the general’s chair. (See the "Rising Sun" chair here.) 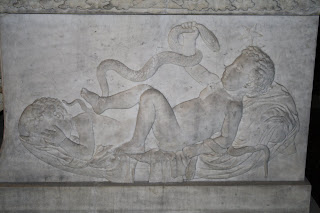 The other side of the throne shows the image of another son of Zeus. The baby Hercules and his twin brother Iphicles are shown in their crib. Their mother, Hera, became so enraged when she discovered Zeus had fathered Hercules by a mortal woman that she threw a snake into their crib. The infant Hercules is shown killing the snake with his bare hands. A five-pointed star is shown over the head of Hercules – an upside down pentagram, in case you’re concerned by such images – with the bottom point of the star touching his head. 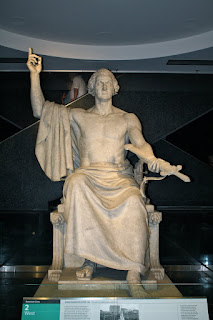 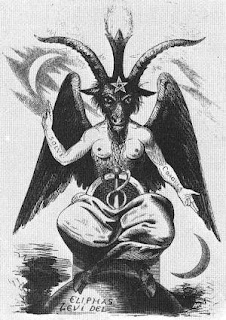 Fringe author David Ickes has noted that the statue of Washington bears a striking resemblance in its pose to the famous illustration of Baphomet, drawn by French occultist Eliphas Levi. Both have the right arm pointing skyward, and the left pointing downward, in the manner of the alchemical phrase, “as above, so below.” Therefore, Ickes suggests, Washington’s statue is an illustration that he is somehow an evil incarnation of Levi’s satanic imagery. It should be noted that Greenough's statue predates Levi's image by 20 years, which didn't appear until 1860 in his book, 'Transcendental Magic' (and which was never intended to be Satanic anyway). 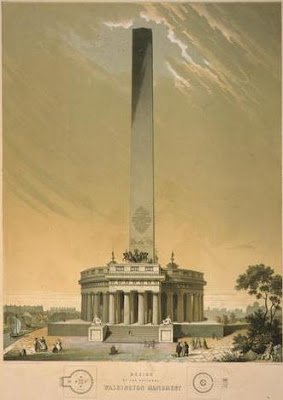 But there is a more plausable explanation that may really capture the peculiar reason for Washington’s odd posture in this statue. The original design of the Washington Monument by Robert Mills (left) was supposed to have been a Greek-style temple, topped by a sculpture of Washington in a chariot, and pulled by six horses. Greenough’s statue looks strikingly similar to the posture of Washington in Mills’ conceptual drawing. The outstretched hand that holds a sword would have actually been holding the reins of the chariot. It is probable that Greenough likely designed the statue as a demo to get the entire commission of Washington, chariot and four horses for the monument.
Fortunately, cooler heads prevailed, and a more monumental, if austere, design was actually constructed, sans chariot.


Mark Tabbert passed along a message today: "According to museum label, the statue shows Washington handing his sword back to the American people and pointing to Heaven. He is not assuming the role of a god, but of Cincinnatus and arguing that that our democratic republic will survive not by force of will, but by the grace of God."

(Portions of this article are adapted from "Solomon's Builders")
Posted by Christopher Hodapp at Sunday, August 30, 2009