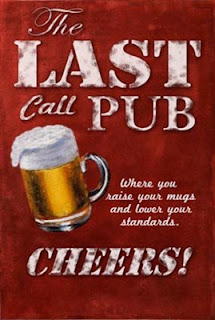 Modern Freemasonry began in the pubs and taverns of London. So it with great sadness that I read over the weekend that more than 1,400 pubs in Britain closed last year, and more than 6,000 are expected to be shuttered within the next five years. Nationally, an average of 4 pubs shut down every day. Once source claims that more than half of British villages are dry for the first time since the Norman Conquest in 1066.

The culprit? Some are trying to blame cheap supermarkets selling beer and a frankly small increase in the beer tax. But the real reason is the recently enacted smoking ban. Smokers have been hounded out of their favorite haunts, and their friends have gone with them. Instead of socializing at the bar, they pick up a cheap 6-pack and stay home, away from the clucking of the anti-smoking crowd—who have NOT flocked to support the now smoke-free pubs. They have killed off businesses they never intended to set foot into in the first place. And a social activity that has been the backbone of English working class society for literally centuries has been destroyed.

The European Union has enforced the smoking ban all across Europe, removing the decision from local lawmakers, citizens and business owners. And the trend of pub closures all across Europe is increasing at an alarming rate.