Eight miles of secret tunnels dug by allied forces during WWI deep in the forests of Northern France have recently been discovered by an amateur battlefield explorer. They were used, in part, by the American Expeditionary Force, sent by President Wilson to reinforce Britain and France. Some of the tunnels were used to set mines below the ground held by German troops. According to Marc Askat of Paris, some 250 military insignias, portraits of soldiers, their horses, and many other symbols were carved into the stone as they were holed up in a quarry used for shelter from the German assault on the Western Front.

From a story in the Daily Mail:


Mr Askat said: 'I have spent a lot of time exploring the limestone quarries used by soldiers during first and second world war and the fact is that very few remains of U.S and Commonwealth soldiers are visible.

'After several months of research on the war diaries and the position of trenches on maps, I found a quarry that was exactly on their target.'After a long crawl underground, I was lucky enough to see a giant Bald Eagle blaze sculpted by the 26th Yankee Division of the United States Army Infantry was in front of me.

'On the floor were, bombs, mortars, hand grenades and many heavily rusted metal devices that you don't want to touch or even know what they are. 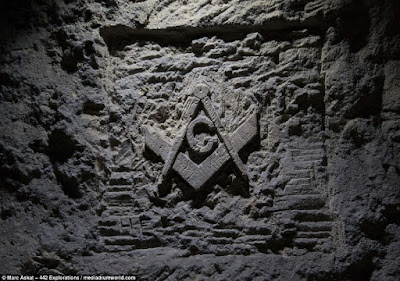 'Many names, nicknames, masonic logos, city names were etched into the walls. This place was very rich with finds, I didn't even check my watch during almost eight hours underground.

'I left quickly after finding a rusted mortar with mustard gas bottles pieces in it locked on the floor, you really don't want to breathe that even after one hundred years.

'This location is invisible on maps and very few people even know of its existence. It is very deep into a forest and if you don't know where it is you have no chance to find it by accident as no one goes there.'