Rosslyn Chapel Soon To Be Unwrapped 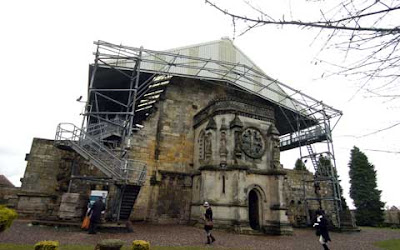 For more than a decade, visitors to Scotland's Rosslyn Chapel have been disappointed to discover the building swathed in scaffolding and covered by a sheet metal roof. The image of the chapel on a hillside seen in the movie version of The Da Vinci Code was a cunning computer-generated special effect, a shot impossible to achieve since the 1990s. The culprit was a 1950s asphalt roof that had been designed to protect the building, but in reality leaked like a colander, eventually covering interior walls and ceilings with green alge.

The steel cover has at last done its job of drying out the porous stone building, so the second phase of the project can now begin: a new roof that doesn't leak, and the cleaning and restoration of its interior details. Helping the bank account has been the rise from 40,000 annual visitors before the Dan Brown effect, to 175,000 at the height of Da Vinci Code fever.

A new visitor's center is being constructed, and the entire project is expected to cost £13 million. The chapel will remain open to visitors while the work progresses. 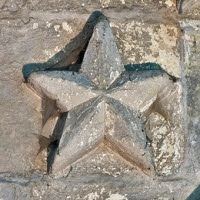 See an article in todays The Scotsman.

The Rosslyn Chapel Trust must still raise over £1 million, and is seeking donations. Donors may sponsor a star carving in the chapel's roof for £250.
Posted by Christopher Hodapp at Wednesday, November 18, 2009