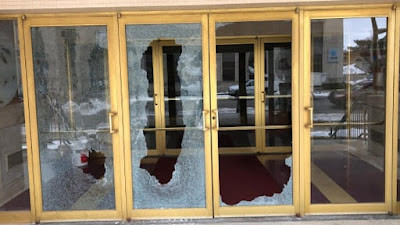 Damage at the Grand Lodge of Illinois in Springfield
by Christopher Hodapp
NOTE: This story has been updated on Friday, February 11 at 5:45AM to include photos and more information about attacks on Masonic sites across Illinois.
Several Masonic locations in Illinois have been struck with deliberate acts of vandalism in the last few weeks. According to a letter circulated by MW Michael E. Jackson, Grand Master of Illinois, the Grand Lodge office in Springfield had its glass door smashed on Wednesday, and after being replaced, it was shattered again on Thursday. 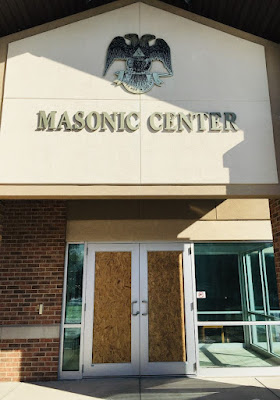 Across town, the Springfield Masonic Center and the Ansar Shrine were also vandalized.
There were no break-ins, and nothing appears to have been stolen.
From GM Jackson's letter:

"At this time, we have no reason to believe this is an attack that goes beyond Springfield but we also have no way to know if it is or will become part of a larger action against Illinois Masonry. Please be diligent and if your Lodge is vandalized or damaged in some way, report it to your local authorities and inform the Grand lodge as well." 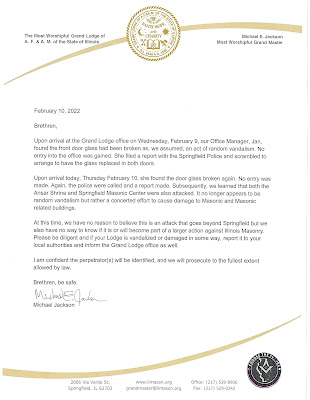 Click the image above to enlarge.Security camera images from the Shrine were circulated today on the newschannel20.com website showing the attacker and what may be his car. Anyone with information concerning these attacks or this person in the photos are urged to contact the Springfield Police Department at 217-788-8427. 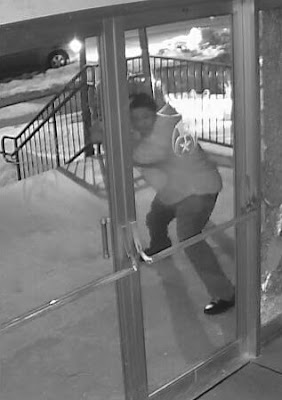 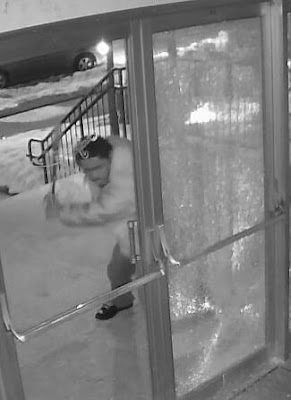 Last month, the Decatur, Illinois Masonic Temple suffered eight different attacks that did an estimated $20,000 in damage to their facility. Decatur police arrested - and released - a suspect in that case. Lodge members there believe all of these attacks may have been committed by the same person.

Meanwhile, suspicious packages were found at Masonic temples in Champaign and Chatham, Illinois a few months ago. One of the packages contained a note accusing Masons of trying to destroy the world.
Acts of vandalism against Masonic buildings have been escalating around the country, along with the circulation of anti-Masonic literature. To the southeast of the Illinois border, southern Indiana Masonic halls have been reporting about thick packets of anti-Masonic material taped to lodge doors or left in their mailboxes.
Photos provided by Ansar Shrine Center
Posted by Christopher Hodapp at Friday, February 11, 2022