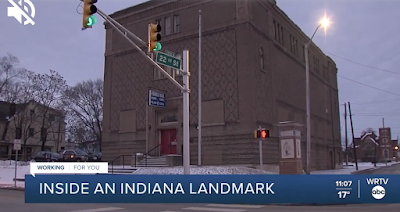 by Christopher Hodapp
Indianapolis' Prince Hall Masonic Temple at 22nd and Central Avenue is receiving a $9,000 preservation grant from Indiana Landmarks Foundation and the Lilly Foundation towards the replacement of their aged roof. The story on WRTV-6 concentrates solely on the building's more recent past as home of Central Lodge No. 1 of the Most Worshipful Prince Hall Grand Lodge F&AM of Indiana. It completely ignores the building's storied origin in 1915 when it was designed as a team effort by the three top, competing architectural firms in the city. Oriental Lodge No. 500 of the Grand Lodge F&AM of Indiana at that time was the largest suburban lodge in the city. Among its members were the principals of those three architectural design companies.
Oriental Lodge had originally been chartered in 1875, and it was a prestigious lodge. In 1904, the Vice-President of the United States under Teddy Roosevelt, Charles W. Fairbanks, became a member (making them one of the only Masonic president/vice-president teams in US history). By 1912, the lodge had 600 members, and just seven years later, it had swollen to 900. By its 50th anniversary in 1925, the lodge had 1,100 on its rolls, and 22nd and Central Avenue was a very hot neighborhood. Odd to think of it today as a 'suburb.' 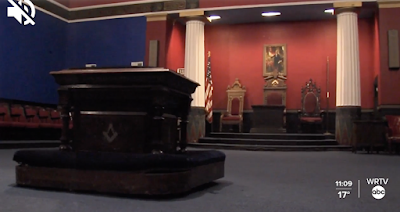 In 1983, Oriental Lodge merged with Evergreen Lodge on the city's west side, and moved out of their temple. It was sold to Central Lodge No. 1 (oldest African-American Prince Hall-derived lodge in Indiana) and a temple association of several other Prince Hall lodges and appendant groups. Before this time, Prince Hall lodges in the city had been renting space in the downtown YWCA on Indiana Avenue.
Out of the 14 purpose-built neighborhood Masonic buildings in the city limits of Indianapolis, outside of downtown's Mile Square, that were standing a century ago, the Temple of Central Lodge No. 1 today is the only Masonic building left that has been continuously built, owned, and operated by Freemasons. This magnificent temple in 1983 became the first Prince Hall building in Indianapolis that had been specifically designed as a Masonic space since their grand lodge's formation back in 1856.
(See my story from 2016: A Tale of a Temple.)
In addition to Central Lodge 1, the following Prince Hall Masonic organizations all meet in that same temple: Waterford 13, Trinity 18, Sumner A. Furniss 61 lodges; Constantine Consistory 25 Scottish Rite; Union 1 Order of the Eastern Star Chapter; Sumner A. Furniss Assembly 32 of the Order of the Golden Circle; the York Rite bodies of Cyrus Chapter 1 Royal Arch Masons, John C. Dawson 22 Council of Royal and Select Masters, and Gethsemane Commandery 37 Knights Templar.
Posted by Christopher Hodapp at Tuesday, February 15, 2022