NPR: 'Freemasons Say They're Needed Now More Than Ever.' 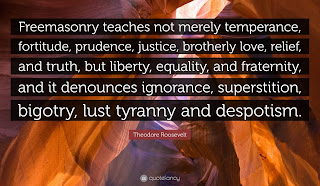 by Christopher Hodapp
NPR is running a story this weekend that I was lucky enough to be a part of: Freemasons Say They're Needed Now More Than Ever. So Why Are Their Ranks Dwindling?
I spoke with reporter Christianna Silva several weeks ago, and she actually comes from a Masonic family - both her father and grandfather were Masons. Along with myself, Ms. Silva included interviews with Illus. S. Brent Morris, author and editor of the Scottish Rite Journal, along with historians Dr. Jessica Harland-Jacob (Builders of Empire) and John Dickie (The Craft).
From the story:

Freemasons argue that the reason to uphold the fraternity goes beyond maintaining historic traditions or belonging to something that once bore immense influence. It might not be a secret society full of presidents and powerful men pulling the strings of society from the shadows, but that's never been the point for these members. Instead, they joined to establish friendships outside of work, and vibe with a community that isn't divisive. At a time in which polarization and division in the U.S. is growing more intense, Freemasons say it's refreshing to spend time with people who aren't arguing.

"People are isolated," Hodapp said. "People are locked in their apartments, or locked in their parents' basement at the age of 35, and don't associate with each other, and social media has them screaming at the computer screen at 3:00 in the morning because somebody told them to get stuffed over something. Every Mason you talk to will stand there and say, 'Yeah, we're needed now more than we've ever been needed.'"

The challenge, he said, is finding a way to communicate that.

"How do you get the message of, yes, there is a place where you can go where people aren't at each other's throats, there's a place that deliberately stops the kind of arguments that are making your life miserable."

In response to the story this morning, I received a message from a gentleman in Washington, D.C. who turns out to be a man after my own heart. He's not a Mason himself, but mentions something I've felt quite strongly about for the last few years:

"I have a suggestion for rebuilding your membership: The most useful thing an organization like the Freemasons could do right now, to make themselves completely relevant and indispensable to the fabric of society, would be to become the ignition point for an American renaissance in civic duty, civic education, and an instrument for advancing the ideals of the enlightenment founded in reason and scientific inquiry, democracy, democratic institutions, the rights of all persons, equality before the law, and above all, the sanctity and liberty of the individual. Now more than ever, we need an institution which can polarize the American people toward decency, duty, and democracy.

"In Washington-speak, they essentially need to become a think-tank like AES, Brookings, or Cato, but differ, with a powerful implementation arm that embeds civic education and reason into school curriculums, civic organizations, popular thinking, the media, and hold leaders and media accountable for upholding democracy, reason, and truth. If the Freemasons used their heritage, assets, and infrastructure to set about bring such a renaissance in thinking about, I might even join."

He's absolutely spot-on, and it's a mission I've proposed for Masons many times.

When Masonry spread throughout the early years of the U.S., between about 1790 and 1826, it did so as part of an attempt by influential East Coast intellectuals to find a way to educate a rough, disparate, illiterate, and largely isolated pioneer population in the western territories about how to run this new democratic republic. The lodges forbade the discussion of both religion and politics in their meetings, the two subjects guaranteed to erupt into fights. And they taught their members how to hold elections, pass legislation, conduct trials, and lose arguments gracefully. In an age before widespread, organized schools, the lodge ritual introduced members to the concepts of the Enlightenment, of the liberal arts and sciences, of the importance of honor and duty, of the cardinal virtues, and more. It was a code of conduct for good citizenship during a period of expansion and chaos. Most of all, lodge taught cooperation among men who had almost nothing in common. The Masons were a finishing school for the 'civic religion' the Founders knew were vitally needed or the new nation would perish. Because first and foremost, when they adopted the Constitution, they recognized it would quickly fail without a population equipped with a basic code of conduct, truth and honor.

To coin an old marching song from WWII, we did it before. And we can do it again.