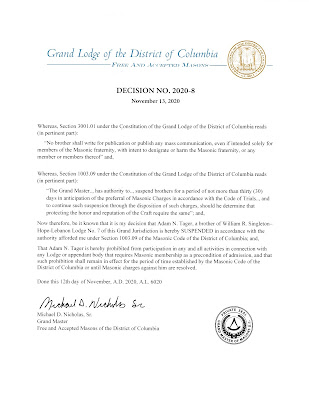 by Christopher Hodapp
In the annus horribilis that is 2020, I suppose none of us should be surprised by erratic or irrational behavior from even the best of men. Between the COVID plague isolation, the anti-social media civil war skirmishes, the fraying of human interaction, and the myriad frustrations that have accompanied nearly everything we all do this year, it's probably unfair to think that Masons could rise above the fray somehow. Hell, just the toilet paper hoarding alone would be enough to drive sane men to madness.
I've gotten two items sent to me in the last week that both seem quite odd. The first one comes out of the Grand Lodge of the District of Columbia.
On November 13, 2020, Grand Master Michael D. Nicholas, Sr. suspended the current Junior Grand Deacon Adam N. Tager from the fraternity, for allegedly writing or publishing a mass communication "with intent to denigrate or harm the Masonic fraternity..."  I haven't seen whatever it is that he is accused of writing, but what's odd was the timing of events. The suspension was issued and circulated via e-mail at approximately 4:04 PM last Friday, just two hours before electronic voting for grand lodge officers officially opened at 6:00. (Click the image above to enlarge.)
The GL of DC's annual communication this year is being held 'virtually' because of the COVID shutdowns. Consequently, online voting has remained open since last Friday, and officially closes on Saturday.
The last-second timing of Tager's suspension resulted in him becoming ineligible for advancement to the position of Senior Grand Deacon. Now it's been reported that several sitting Masters (and voting members of grand lodge) have subsequently filed charges against two other brethren who are challengers for the Deacon positions now that Tager has been shut out.
Curiously, the suspension announcement email was accompanied by a second letter from the Grand Secretary explaining that brethren are free to contact RW Brother Tager, "so long as there is no discussion regarding the secrets of Freemasonry." 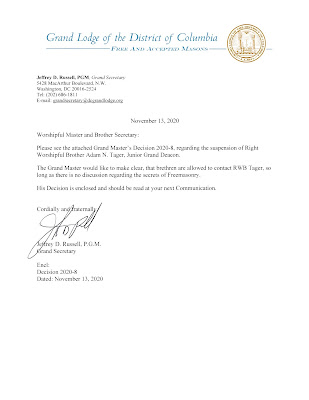 (I said I have two stories. The other is coming out of South Dakota, and I'm still trying to piece that one together...)