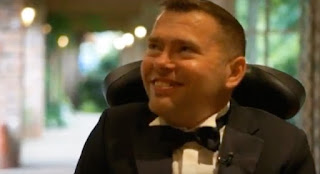 Jason is almost completely paralyzed and suffers from Motor Neuron Disease (MND).  He is confined to an electric wheelchair and communicates via a computer speech synthesis voice, much as the late Stephen Hawking famously did throughout his adult life.  But that hasn't stopped him from activities like parasailing, riding in a Formula 1 racing car, and other out of the ordinary experiences.

And he is now counted among the largest and greatest fraternity in the world.

Different jurisdictions throughout the Masonic world have varying requirements concerning petitioners for the degrees.  Up until about 50 years ago, it was commonplace for grand lodges to have a so-called 'doctrine of physical perfection.' Indiana actually had a rule until the 1970s that any man wearing a hernia truss was ineligible for the degrees of Masonry.  Others forbade men with missing limbs - even veterans - for a variety of reasons.  But with the passage of time and modern day awareness of people with disabilities, numerous grand lodges have relaxed this requirement.  Some have removed restrictive rules, while others have granted dispensations for extraordinary circumstances.  It seems tragic to turn away an excited and dedicated man, or one who has a family history with the fraternity, because he is blind, is missing fingers, or can't kneel or walk a floor with squared corners. 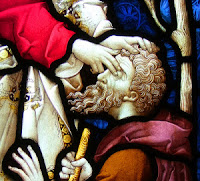 Here in Indiana, we established Bartimaeus Lodge U.D. as a special purpose lodge back in 1961.  Made up of members from all over the state, Bartimaeus Lodge is called upon in a wide variety of situations to assist with, or fully confer, the degrees of Freemasonry when a candidate has special physical needs as a result of a disability.  The lodge is appropriately named after the blind beggar whose sight was restored by Jesus on the road to Jericho, as told in the Book of the Apostles of Matthew and Luke, and actually identified by name in the account by Mark (10:46-52).  The lodge's mission is to permit candidates who are handicapped to experience the degrees of Masonry as closely and as properly as their abilities will permit. Since its formation, they have initiated, passed and raised countless Indiana Masons who are blind, deaf, infirm, confined to wheelchairs, and much more.
at 6/21/2018