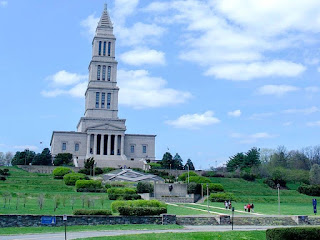 The federal government named Alexandria’s George Washington Masonic National Memorial a national landmark today.
Here’s what the National Park Service and Interior Department had to say about it, from the news release issued today:
Towering over the first president’s hometown of Alexandria, the George Washington Masonic Lodge National Memorial is a prominent feature of the Washington, D.C. area skyline.
Today, Secretary of the Interior Sally Jewell and National Park Service Director Jonathan B. Jarvis announced the memorial as one of four newly designated national historic landmarks. The designation recognizes sites that possess exceptional value and quality in illustrating or interpreting the heritage of the United States.
“Though very different from one another, these places reflect the creatively and ingenuity of the American spirit,” said National Park Service Director Jonathan B. Jarvis. “National historic landmarks are an example of how the mission of the National Park Service extends beyond park boundaries to recognize additional places of national significance in communities throughout the country.”
In naming the Masonic Temple as a national landmark, the government said:

The George Washington Masonic National Memorial stands among the most architecturally significant projects to honor George Washington and one of the boldest private efforts to memorialize him. The Grand Lodges of the states and territories, which usually operate independently, joined forces to build this national memorial. This eclectic building combines neoclassical architecture common to American memorials and civic buildings with a modern skyscraper design.