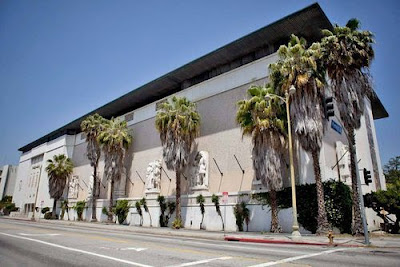 Have a look here.

The Scottish Rite Masonic Temple on Wilshire is probably the most mysterious Millard Sheets building (and one of the more mysterious in LA). It's been on and off the market for years (currently seems to be off), and seems pretty hard to get inside--when we called to ask about a tour, we were told that we'd need a city permit to visit. According to a 1994 LA Times article, the building "housed National Guard troops during the 1992 riots and has been used for funerals of police officers." Who knows what secrets this place holds? Masons, obviously, are known for being pretty secretive. Either way, the building is super cool; we'll let Sheets tell you the story of what it is and how it got there...

Be sure to look through the photos. It's a magnificent building, with a very uncertain future. It has long been the subject of a battle with the neighborhood over parking, which limits its future use to a potential buyer. It's prime real estate, which probably means a wrecking ball is its fate.
Written by Christopher Hodapp at 9/20/2012