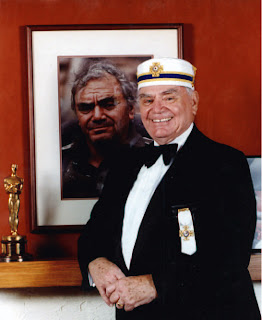 Illustrious Brother Ernest Borgnine 33° passed to the celestial lodge today at the age of 95.

Ernest Borgnine, the beefy screen star known for blustery, often villainous roles, but who won the best-actor Oscar for playing against type as a lovesick butcher in "Marty" in 1955, died Sunday. He was 95.

His longtime spokesman, Harry Flynn, told The Associated Press that Borgnine died of renal failure at Cedars-Sinai Medical Center with his wife and children at his side.

Brother Borgnine was a member of Hollywood Lodge No. 355, and a 33rd° Scottish Rite Mason in the Southern Masonic Jurisdiction. In 2000, he received his 50-year pin as a Freemason in Abingdon Lodge No. 48, Abingdon, Virginia. He joined the Scottish Rite Valley of Los Angeles in 1964, received the KCCH in 1979, was coroneted a 33° Inspector General Honorary in 1983, and received the Grand Cross of the Court of Honour in 1991.
Posted by Christopher Hodapp at Sunday, July 08, 2012