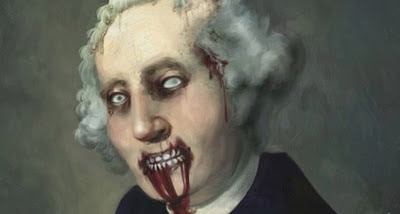 William Thornton is best known for his winning design for the U.S. Capitol, building in Washington DC. As a part of his design, he envisioned a special burial niche for the body of George Washington. But Thornton was trained in Edinburgh, Scotland as a doctor, and when George Washington died in December 1799, Thornton had bigger plans than just putting the President's body in a special tomb. He concocted a scheme that would use cutting edge techniques to reanimate George's body into a zombie.

The president may not have feared death, but he did fear being buried alive. Before he died, he commanded his secretary, Tobias Lear, to make sure that he would not be entombed less than three days after he died. In accordance with Washington's wishes, his body was put on ice until it could be moved to the family vault.

That's where the story gets a little strange. The morning after Washington died, his step-granddaughter Elizabeth Law arrived with a family friend, William Thornton. History best remembers Thornton as the architect who created the original design for the Capitol building, but he was also a trained physician, having studied at the University of Edinburgh. Although he did not practice medicine for much of his life, Thornton always had a keen interest in the workings of the human body, and he suggested a novel method for resurrecting the fallen warrior. Thornton told Washington's wife Martha that he wanted to thaw Washington's body by the fire and have it rubbed vigorously with blankets. Then he planned to perform a tracheotomy so he could insert a bellows into Washington's throat and pump his lungs full of air, and finally to give Washington an infusion of lamb's blood. Friends and family declined Thornton's mad scientist offer, not because they thought his solution impossible, but because they felt the nation's first president should rest in peace.

So what gave Thornton the idea to play Dr. Frankenstein? Susan E. Lederer, author of the book Flesh and Blood: Organ Transplantation and Blood Transfusion in Twentieth-Century America, notes that many physicians in the late 18th Century believed that lamb's blood had special properties, and believes Thornton meant to give Washington's circulatory system "a spark of vitality" that might jolt him back to life. But Paul Schmidt, in his article "Forgotten transfusion history: John Leacock of Barbados" published in the British Medical Journal, suggests that the University of Edinburgh may have been on the forefront of transfusion research (unless you count all those transfusion experiments in 17th-Century France). Thornton wasn't the only Edinburgh alum thinking about blood transfusions during that time period. Philip Syng Physick, an earlier Edinburgh grad (who incidentally practiced in Philadelphia, where Thornton himself briefly practiced medicine), is reported to have performed a human blood transfusion as early as 1795. John Leacock, a later graduate, performed successful transfusion experiments, believing an infusion of blood would "excite" the recipient heart. Leacock's experiments in turn influenced James Blundell, who is credited with introducing the process to the mainstream medical community. Schmidt wonders if the Edinburgh community took particular interest in those early French transfusion experiments, planting the idea in Thornton's mind.